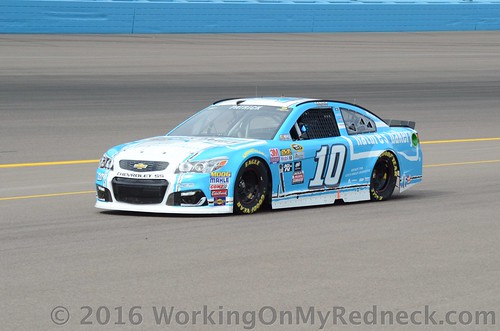 Patrick started the race from the 30th position and drafted her way up to 16th before completing the first lap. She remained inside the top-20, running as high as sixth before the No. 10 Nature’s Bakery Chevrolet team pitted at lap 39 for tires, fuel and a wedge adjustment. Trouble on the right-front tire dropped Patrick back to 34th after the stop, but luckily the caution flag waved at lap 41, allowing her to catch up to the lead pack.

For the first half of the race Patrick ran all three lines – top, middle and bottom – in an effort to see what would work best for the No. 10 Nature’s Bakery Chevrolet team. She was scored in the 19th position when the caution flag waved again at lap 114. The team pitted three times under caution – twice to address the issue with the right front and then the final time for tires, fuel and a packer adjustment.

Patrick primarily ran the top and middle lines for the second half of the race. With less than 50 laps to go she was scored in the 11th position, and with 25 to go she was 25th. A late caution set the field up for an overtime finish. Patrick restarted from the 23rd spot, was scored 15th on the white-flag lap and took the checkered in the 20th position.

“The top and the middle worked best for us today,” Patrick said. “Every time I got stuck in the bottom lane it seemed like we would drop back. The No. 10 Nature’s Bakery team did a great job all day, and we ended up with a decent finish.”