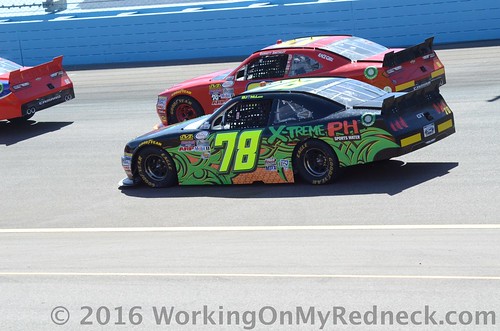 Just two races away from ending a brutal stretch of 21 NASCAR XFINITY Series races in a span of 20 weeks, driver and team owner B.J. McLeod (@bjmcleod78) returns to Charlotte (N.C.) Motor Speedway (CMS) for Friday night’s Drive for the Cure 300 looking to end the sweep on a high note.

“Looking forward to getting after it this weekend at Charlotte,” said McLeod. “It’s hard to believe there’s not that much racing left – but we definitely plan to make the most of what is still left. Charlotte is a big race.

“Everyone wants to run well because all the teams are here. For us, we know what we’re capable of and that’s what we are going after Friday night.”

Ironically the massive sprawl of races dates back to the May event at Charlotte where McLeod made his third start at the 1.5-mile oval. This time around, the circumstances are much different.

While it’s easy to have a plan in place on what you want to do – hope to accomplish – the B.J. McLeod Motorsports team is keeping their eyes glued on the radar knowing that Hurricane Matthew could have a potential impact in the weekend schedule.

“Just depending on what the storm does it could have a big impact on our weekend,” added McLeod. “Some models or reports suggest the storm could have an impact on us either Friday or Saturday, so we’re just going to keep an eye on it, while also keeping those directly in the path of its wrath stay safe and sound.”

No matter what eery forecast lies ahead, McLeod said getting his No. 78 B.J. McLeod Motorsports Ford Mustang on the track Thursday is critical to the team’s overall plan.

“There’s a lot of teams that are going to be at Charlotte this weekend, so we just need to make sure we’re on our game and using the practice time to our advantage,” said McLeod. “In May, we were able to qualify on speed and have a top-25 finish. Fast forward a couple months, I think we’ve improved our program from where we were then, so I’d like to qualify better and maybe turn that top-25 finish into a top-20 run.

“It won’t be easy, but always up for a challenge. With the unpredictableness of Hurricane Matthew, I think you’ll see us spending a lot of time in race trim to make sure we have a good balance on the car whenever we get the race underway.”

The Wauchula, Florida native also wants to have a solid rebound after a disappointing finish at Dover last weekend where a series of early-race obstacles left the avid driver with a 33rd place finish.

“Last week was tough to swallow because I thought we really had a good race car,” McLeod mentioned. “Some things happened during the race that I didn’t have control over that really took us out of the hunt for a solid finish. And because of that we lost some crucial points too. With just five races left for us this year every point is so crucial. Good strong, solid finishes are important – but equally important are those points. We’ll just stay after it.”

McLeod, who will make his 72nd career NASCAR national series start this weekend welcomes Clint King back to the No. 15 Ford Mustang for 200 laps Friday night at CMS. King made his XFINITY Series debut at Richmond International Raceway dialing in a respectable 30th place run.

“We’re happy to have Clint back this weekend at Charlotte,” sounded McLeod. “He really got a feel for these XFINITY Series cars and now he’s ready to make that next move to the bigger track with higher speeds and finesse. Clint is really open to listening and offering feedback in and outside the car. I look forward to seeing what kind of result he can produce in his mile and a half XFINITY debut.”

Veteran industry crew chief George (David) Ingram Jr. will call the shots for the No. 78 B.J. McLeod Motorsports Ford Mustang for the 29thrace of the 2016 NASCAR XFINITY Series season.

You Can Win!: XFINITY Series race fans will have the opportunity to win two (2) NASCAR XFINITY Series garage passes for either a race during the 2016 or 2017 through the team’s Twitter @teamBJMcLeod and Facebook page. The next opportunity to win will take place onOct. 8, 2016 through the team’s social media pages. Additionally, new B.J. McLeod Motorsports fan gear is now available where a random winner will also have the chance to win free XFINITY passes.

For more on B.J. McLeod, please visit his official Facebook page, while also visiting the team’s brand new website atBJMcLeodMotorsports.com. Additionally, the team is growing their presence on Twitter, with the team’s new account @teamBJMcLeod. McLeod also utilizes his personal twitter too, @BJMcLeod78. Show your support with the team by mentioning our new hash tags #skullracing78 and #BJ78Nation.

Marketing partnership opportunities are available for the No. 78 Ford Mustang for the remainder of the 2016 NASCAR XFINITY Series season. Interested inquiries are encouraged to contact pr@bjmcleodmotorsports.com.