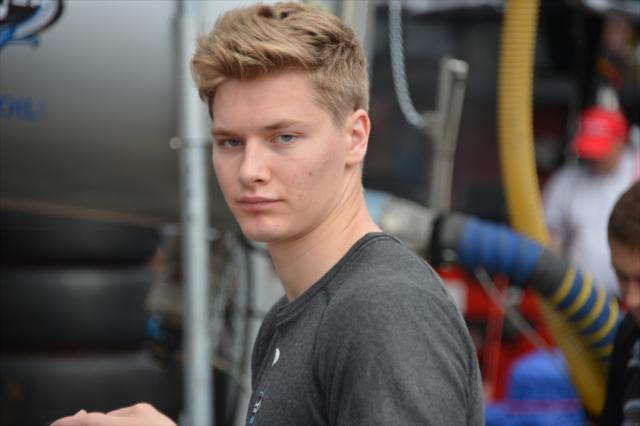 “It’s a huge honor to get this type of opportunity and be a small piece of it,” Newgarden said on a conference call. “I think this place is the American dream and it’s one of the best teams in the world.”

Roger Penske’s cars dominated the Verizon IndyCar Series in 2016. Simon Pagenaud won the series championship, Will Power finished second and Castroneves third in the points, the team’s first 1-2-3 since 1994.

Pagenaud and Power are already under contract for next season. Newgarden is now part of an operation that won 10 races and 11 poles this season and celebrated its 14th Indy car title in the legendary owner’s 50th anniversary in racing.

Newgarden is the first American to land a fulltime ride with Team Penske since Sam Hornish Jr. in 2007. As a youngster watching races, he considered the Team Penske machines “the coolest cars out there.” After finishing a career-best fourth in points for Ed Carpenter Racing in 2016, Newgarden faces the challenge of succeeding against three rivals who are now teammates.

“I hope it pushes me to a new level,” he said. “I’m probably going to figure out some things about myself that I didn’t know.”

Cindric conceded it wasn’t an easy decision to replace Montoya, a two-time Indianapolis 500 winner who drove the past three seasons for Team Penske and lost the 2015 championship on a tiebreaker to Scott Dixon. But the team had targeted Newgarden since he was an Indy Lights champion in 2011.

Although Montoya has an open offer to drive a Team Penske car in the 2017 Indianapolis 500, the Colombian has expressed the desire for a fulltime ride. After the season-ending GoPro Grand Prix of Sonoma last month, Montoya acknowledged he has received strong interest from other teams.

“It was just something where we needed to decide if we were going to position ourselves for another year and miss the opportunity to have Josef as part of our team in the future, so a really difficult decision for us,” Cindric admitted. “Juan’s really been a big part of our success. Despite where he finished this year (seventh in points), he pushed our guys very hard.

“He’s been a great guy to work with and we’d continue to love working with him in the future. Really, the ball is in his court as far as whether it’s not the first choice for him, but we’d like to continue some association with him if it makes sense for him.”

Newgarden won three races in the past two seasons for ECR and its CFH Racing predecessor. His July victory at the Iowa Corn 300 was one of the most dominant runs in series history, as he led a record 282 laps. The triumph came just a month after Newgarden sustained a fractured clavicle and right hand in a Firestone 600 crash at Texas Motor Speedway.

Aside from possessing driving talent and an engaging personality that will represent his new employer well with sponsors, he’s still young, which gives Penske a driver to continue to build its dynasty around. Pagenaud, 32, joined the team in 2015. Power, 35, is the 2014 series champion, a 29-race winner and has been with Penske since 2009. Castroneves, 41, has also won 29 races since joining Penske in 2000.

“The challenge of having three other really talented drivers around me is only going to be a positive thing,” Newgarden said. “There’s guys from all over the world that bring a little something to the table and I’m going to try and do the same. I’m going to try to bring a little something extra that maybe these guys haven’t seen before, which will help the program. In return, I’m expecting to get a lot of that from those guys.”

Newgarden will get his first test drive with his new teammates Monday at Road America in Elkhart Lake, Wis. He’ll also test next week at Gateway Motorsports Park in Madison, Ill.

“He has shown me that he’s a winner,” Cindric said. “He’s shown me that he can handle himself on the racetrack and off the racetrack, and that’s really the core ingredient for us, is somebody who can work in our environment because our environment is not for everybody. At the same time, as Roger has always said, it’s hard to run a driving school with the expectations that are here and we need to also have somebody that we feel like can work within our group and our teammates. When you look at who we’ve hired over the years, that’s been an important part of our structure although it’s not the No. 1 requirement. We want people who can drive race cars and represent our organization and those we represent in the right way. We felt like he fit that mold.”

Castroneves hasn’t won in more than two years but was still a contender with eight top-five runs, including a pair of seconds and thirds, this past season.

“He’s a guy who’s been a big part of our team,” Cindric said of the Brazilian. “When you look at the definition of teamwork and leading by example on and off the track, he’s certainly done that. Like anybody else, his career is not forever, either. He’ll be the first one to tell you that. He’s a big part of where we’ve been. He and I started with this team at the same time, so certainly a lot of loyalty there on both fronts.”

Newgarden admitted it was a difficult decision to leave Carpenter, for whom he has tremendous affinity as a driver as well as team owner. But he said the choice came down to wanting a new challenge to provide an opportunity for growth.

“There’s been a lot of camaraderie there in the past for me and I’ve had a lot of great guys to work with and bounce things off of,” Newgarden said of ECR. “What’s really going to change is there’s going to be more of that.”

Newgarden was asked about living up to the expectations for excellence that come with driving a Team Penske car.

“Pressure is always present wherever you’re at,” he said. “I always put pressure on myself with any situation I was in driving in INDYCAR. We had high expectations at ECR and rightfully so. I thought we had a lot of talented people there, we had a great process, great ownership and great partners, we really had a lot of tools to be successful. With that, there was a lot of pressure there to do a good job for everyone involved, our partners and our ownership.

“So I don’t foresee that shifting too much. You’re going to have that sense of responsibility anywhere you race, but it’s certainly hard not to be inspired, I guess, or overwhelmed when you walk into the Penske establishment. It’s filled with a lot of great people as well, a lot of great partners, tremendous support from the ownership. So I think that same kind of pressure I felt at ECR is really going to actually translate to what I feel here as well.”