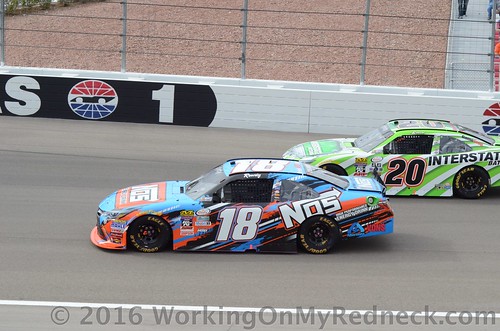 NASCAR fans don’t need a reason to pay extra attention when Kyle Busch and “Blazingly Bad” Brad Keselowski race for position at any track. The two drivers are far from friends.  It is safe to say that they do not exchange Christmas cards, nor have Christmas dinner together!

So it was of little surprise that they didn’t have the same view of their incident with four laps left in the Xfinity Series Food City 300 Friday night at Bristol Motor Speedway.

Busch attempted to pass Keselowski for the lead by using the inside lane, and when Busch tried to come up in front of him in the upper lane, Keselowski did not lift out of the accelerator and clipped him in the right rear. Busch’s car slapped the fence and then got plowed into from behind by Ty Dillon.  Which ended KyBu’s XFINITY race.

As he left his hauler, Busch was asked if he thought that incident was clean, and he replied: “He’s a dirty racer.”

Keselowski said while he didn’t want to see it end that way, there just wasn’t enough room and he had position in the lane. He said Busch had no choice to slide up because the inside lane wasn’t as good in Turns 3 and 4 as it was in Turns 1 and 2, where Busch initially had made the move to pass.

The two drivers have traded barbs before, including at Bristol in 2010 when they had contact on the track. There would be little surprise if they battled for spots again in the Sprint Cup race Saturday night.

“Everybody loves hard racing until they are a part of it and it is their driver that doesn’t come out on the good end,” Keselowski said.

It will be interesting to see how this latest saga between Kes and KyBu unfolds in the remaining 14 races this year.  Could there be a payback during The Chase to seal either driver’s chances of winning another championship?  Stay tuned race fans, the answer may unfold before you very eyes!