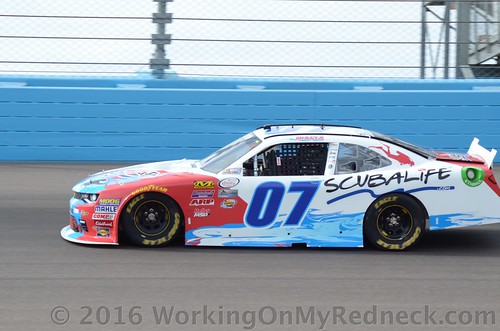 “That was a great weekend for us!” said Black. “We finished the race strong, and it’s great to get a first Top-15 finish as a team. We’ve put in a lot of hard work over the past couple weeks, so it’s nice to see it pay off.”

The team worked hard in Thursday’s first practice session to dial in a tight handling race car. Black was hoping to try racing the top line of the track in the second practice, however rain would end up canceling the session completely.

Rain continued to play a factor in Friday afternoon’s qualifying session. After being delayed several times due to light showers, Black and his team decided to gamble on going out early in the session on a green race track in hopes to make a clean run without interference from other cars. The strategy did not play out as well as they hoped, and Black went on to start the race from the 28th position.

Starting near the back of the pack, Black had his work cut out for him on the half-mile bullring as he battled traffic and a tight handling race car for the majority of the race. The team worked hard to make changes under each pit stop to help Black climb through the field even while dealing with trackbar issues and keeping up with changing track conditions.

Black expertly avoided a series of late race incidents and climbed into the Top-20 with less than 100 laps remaining in the event. The team elected to stay out on the penultimate caution to keep track position. On the final caution of the night Black brought the car down pit road to address a possible tire issue and get a set of four new tires in preparation for a green-white-checkered finish. Black held on to bring his Chevrolet home 14th, his best career NXS finish to date.

“The team did a really good job with changes throughout the night,” said Black. “They kept digging all night, and we played it smart and got a good finish out of it. We got trapped down a couple laps early on but we kept working hard the whole race and the finish showed that.”

Next up for Black and Team Scuba Racing will be the Road America 180 Fired Up by Johnsonville at Road America on Saturday, August 27 at 3:00 p.m. ET.

Fans can keep up with Ray Black Jr. by following him and his sponsor, ScubaLife, on Facebook, Twitter and Instagram at @TeamScubaRacing and @RayBlackJr. Learn more about Ray Black Jr. and Team Scuba by visiting www.rayblackjr.com and www.teamscuba.com.