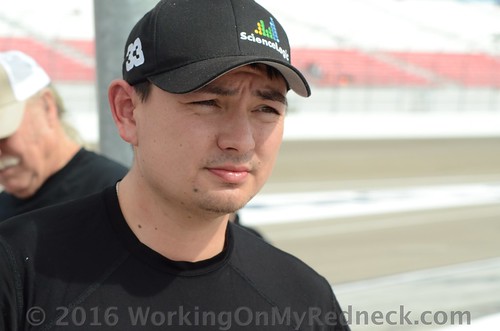 This is the second time that I have been able to interview Ryan Ellis over the past twelve months.  This 26 year old up-and-coming young race car driver is driven to get into the premiere division of NASCAR, the Sprint Cup Series.

Some of Ryan’s past racing accomplishments are quite impressive.  Ryan was the 2005 Virginia State Pro Legends Champion. In 2009 Ellis was Teen Mazda West Coast Champion and  in 2011 he was crowned the Grand-Am ST Rookie of The Year.

Now Ellis has his sights set on progressing up through the NASCAR ranks, ultimately to establish himself as a Sprint Cup race car driver.  However, Ellis enters this chapter of his life without deep pockets or huge corporate sponsorships.  He is doing it the old fashion way of show casing his talent and “beating the bushes” trying to network, establishing partners and closing the deals to gather up requisite sponsorship to make his dream come true.

I was able to connect with Ellis last week and herein lies our conversation:

WorkingOnMyRedneck:  You were able to jump into the No. 33 Joe Falk Chevy for your Sprint Cup debut at Phoenix last November.  Can you explain how you were able to put that deal together?

Ryan Ellis:  It always comes down to sponsorship whether drivers like to admit it or not. A lot of these guys are bringing their own money nowadays, so the only way to fight against them is to bring sponsorship. I send a lot of sponsorship proposal every day, and ScienceLogic just happened to work out. I had wanted to make my Sprint Cup debut and they were pretty set on Sprint Cup as well. I made a few phone calls after solidifying our deal and we got it all put down on paper!

WOMR:  You have driven on several occasions Jim Rossenblum’s No. 28 FDNY truck, as you did in the year’s Daytona 500.  What is your relationship with Rossenblum and his amazing group of FDNY volunteers?

RE:  Jim was one of the first guys to really give me a shot in NASCAR. I really love driving for them and the guys that help him out just have fun. It’s a nice weekend to take a step back and really enjoy where you are in this sport. Sometimes it’s easy to get caught up in the chaos and business of NASCAR, but these guys have brought a very short-track approach and family-like atmosphere to the big leagues of NASCAR. That’s why it’s so cool to race for them at tracks like Talladega and Daytona. A small group of volunteers are able to compete against teams like KBM (Kyle Busch Motorsports) and BKR (Brad Keselowski Racing). No matter what, they have fun. Without Jim, I wouldn’t have the opportunities I have today, so not only is he a family friend, but he’s done a great bit for my career.

WOMR:  Ryan do you have PR representation that you rely on to put your racing packages and deals together?  If you do not have PR reps then do you coordinate and cultivate your own sponsors and put these rides together?  How did you get hooked up with ScienceLogic?

RE:  I’ve had management groups in the past that have helped me out like P1 Groupe. They did a lot for me helping me get from Grand-Am to NASCAR, but as my roots in NASCAR grew, I began to know just about everyone myself. I’ve found it’s pretty hard to keep track of things and remember to tell another person, and I don’t have the money to pay someone to do work for me, so it’s just easier for me to do it myself. I like being involved in every aspect of this sport and I think it helps me create relationships with sponsors that other drivers cannot. I honestly feel like I’m friends with my team owners and sponsors and I think a lot of drivers who have strict management representation lack that. Because I’m forced to make these phone calls myself, I think team owners have a bit more respect for the grind that I put in and are more likely to help me out. Every ride comes about after a million text messages, email threads and what not. It’s hard to really know if you’re driving week to week especially when you’re not bringing money. Often, I wait and see if there aren’t funded drivers that week, and if there are professional opportunities available, the phone might ring. I’m very lucky to be in the position I’m in and have the trust of many team owners, so I try and not lose that. I’m brought in to be a professional for small teams and try and gain as many points and positions while keeping the car in one piece. The second I don’t do that, I might not be in the same position I’m in today.

The ScienceLogic deal was a culmination of a lot of sponsorship proposals and networking. It came down to an introduction from a fraternity brother of mine from the Kappa Sigma Fraternity. I really think that most successful sponsorship leads come from a networking introduction rather than a cold call, so I’m constantly working on building my network. Kappa Sigma was a huge part of this and I couldn’t be here without them. Once we got ScienceLogic on board, we showed them the value that most people don’t know exists in sponsorship – the VIP passes, hospitality, at-track networking, and of course, the signage on the racecar. They’ve loved it, and I’m very lucky to have them on board.

WOMR:  What are your plans for the remainder of the 2016 season?  What rides do you have firm commitments?

RE:  It’s tough to say what will happen week to week, but I know I’m racing at Indianapolis and Texas with BK Racing in the No. 93 ScienceLogic Toyota. Outside of that, I’m doing all I can to find road course rides the next couple months.

WOMR:  What are your goals for the remaining year?

RE:  I want to make Indianapolis in Cup and find rides for at least two of the road courses between trucks and XFINITY. Outside of that, I’m not sure. I just want to get the most out of the equipment I’m in every week. I want to race every week.

WOMR:  What would constitute a successful 2016 season?

RE:  I think a successful season is just a step forward from the year before. So in my mind, I’ve already had a more successful year than I could’ve imagined. I’ve gotten my first top-15 in XFINITY, I’m going to hopefully be making three Sprint Cup series starts this year, and I’m working on more. I’ve raced more XFINITY full races this year than I did all of last year and we aren’t even halfway through. I’ve been very blessed to have this many opportunities this year and although I obviously have much higher aspirations for my future, I’m very happy to be where I’m at this year. Right now I’m focused on making Indianapolis, because that would be one of the coolest things I’ve ever done in my life and it’s going to be a huge weekend for ScienceLogic.

WOMR:  What can we expect to see you driving in the remaining 2016 season?

RE:  Hopefully part time in Cup in the No. 93 ScienceLogic Toyota, mostly-full time in XFINITY in various rides, and maybe a few truck series races in there. I know I’ll be attempting to make Pocono in the FDNY Racing Truck so I hope we are able to make it there as well.

WOMR:  Do you have some possibilities in the works for 2017?

RE:  Nothing yet! I just want to be full time in something. If I can work a few Cup Series starts in there, I’d be happy, but ultimately I just want to keep working forward and finding better opportunities in better equipment each and every day. I hope that I’m able to do that with ScienceLogic in 2017.

WOMR:  Can you explain what caused your bout with carbon monoxide at Daytona?  What were your symptoms during or near the end of the race?  What did the infield care center do for you initially?  What has the days following the Daytona race been like? Lastly, what have you been doing to get you through the few days since Daytona?

RE:  I knew that the car was really hot at Daytona, but sometimes, especially in July at Daytona, it’s just hot.  After I lost the right rear tire, I could tel that it was getting a lot hotter in the cockpit, and not only that, but there was a lot of hot air flowing through the cockpit.  My water bottle holder broke and turned over, so I didn’t get any water after lap 20 or so.  I knew I was dehydrated and hot, but there was nothing that I could do in the cockpit to change that.  I didn’t know there was carbon monoxide in the cockpit until about 10 or 20 laps to go when I started getting dizzy, my limbs were numb, and my veins starting hurting.  When I got out of the car, I couldn’t move my hands very much and I knew that I was too dizzy to stand.

It turns out that when I lost the right rear tire I lost much of the crush paneling around that tire so that the exhaust was getting pulled into the car.  Obviously, that coupled with the heat and dehydration didn’t mix well.

When I got to the infield car center, they offered me an IV and they monitored my vital signs.  I was in there about 45 minutes before my numbers came down to the point where I could get out of there.  I drank a ton of Gatorade and water and just tried to get my head back together.  Obviously, I was happy with the race finish, but I really wasn’t thinking about it at that point.

Since Daytona I have been focusing on my normal workouts like boxing, hockey, and weightlifting.  All the while I am still working on sponsorship proposals in my free time and visiting the race shops preparing for the next race.  I feel pretty normal now,  I just have a pretty lingering headache.

As you can see from this insight, Ryan Ellis is a very driven and determined young man.  He does not have a PR firm doing all the “dirty work”.  That is a cost that he does not have the luxury to absorb at this juncture of his career.  Instead, Ellis has rolled up his sleeves and taken “the bull by the horns”, taking on those tasks himself!

As you can see there is more to making it in NASCAR than just pure talent!  To make it in this business it takes a combination of talent and the right corporate sponsors, as well as a well positioned race team for success.