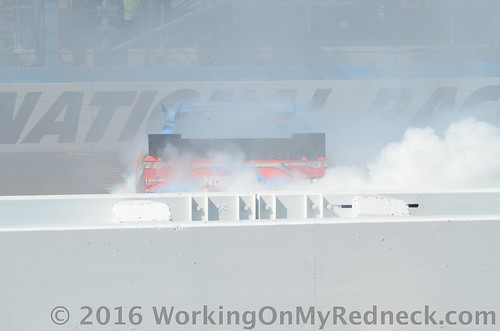 It was a race Kyle Busch won with a dramatic run around the outside lane at Kentucky Speedway.

It was a race Erik Jones lost when he hit the wrong switch on his dashboard, killed the engine and slowed under caution late in the race.

But, interestingly, it was a race where Jones showed Busch, the pole winner, the key to victory, demonstrating to his Joe Gibbs Racing teammate that the outside line was viable when racing side-by-side with an opponent.

Clearing Austin Dillon off Turn 4 in the first lap in overtime in Friday night’s Alsco 300 race, after caution slowed the race for the fifth time, Busch pulled away to beat the Richard Childress Racing driver to the finish line by .455 seconds.

Daniel Suarez finished third after chasing Busch to the final yellow flag, then losing the runner-up spot to Dillon on the last restart. Jones came home a disappointing fourth after outdueling Busch for the lead on Lap 175, only to give it up when his car wouldn’t refire under caution and failed to keep up with the pace car, costing Jones two positions.

Busch led 185 of the 201 laps in winning for the fifth time in nine starts this season, the second time at Kentucky and the 81st time in his career, extending his own series record.  That kind of domination by KyBu could make some people say that he “stunk up the show”!

But it was the run around the outside lane, after Dillon pulled even on the backstretch on lap 200, that proved decisive.

And that’s exactly how Jones had passed Busch for the lead on Lap 175.

“I didn’t think he’d be able to hold it through (Turns) 3 and 4 like that,” said Dillon, who thought he had the preferred position on the inside. “But he did a great job of holding me down. I wish we could have got it done for (sponsor) Rheem, but it was a really close race.”

Busch was roughly a half-second ahead of Suarez and appeared to have the race in hand when caution flew on Lap 195 with smoke billowing from Mike Harmon’s engine.

“We always get the Kyle Busch cautions,” Busch said. “Apparently this time it was true. There was some problems with another car smoking. You always have to make your money’s worth, I guess. Always have to give the show to the fans and their money’s worth.

“Certainly means a lot to us to win here and bring our Camry home to Victory Lane again at Kentucky Speedway.”

Jones said he hit the wrong button when he was rolling under caution and fell behind the pace car, allowing Busch to pass him. NASCAR rules require a driver to maintain pace car speed in order to keep his or her running position.

“I think we had the fastest car here once we got out front,” Jones lamented. “It’s just hard to get back up to the front when you get back in traffic.”

But before he fell back, Jones had already given Busch the road map to victory.

“When Erik drove into Turn 3 with me, I started to roll out just a little bit, because I knew I needed to in order to run the bottom,” Busch said. “And he drove right on past me, and I was like, ‘Well, all righty then.’

“I was waiting for him to slip and to not be able to control his car in the black, in the rubber. And it stuck for him and he made it work. I definitely learned that there was a little bit of speed up there, at least for one lap, for one corner.”

And that one corner made all the difference on Friday night for KyBu!