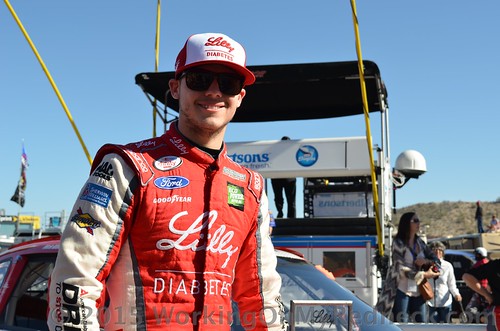 Roush Fenway Racing driver Ryan Reed will run a special paint scheme on his No. 16 Lilly Diabetes/American Diabetes Association Ford Mustang this weekend at Charlotte Motor Speedway (CMS), recognizing veterans who have served and bringing awareness to the one in four who live with diabetes. As a part of NASCAR’s Salutes program, the car will feature a series of red, white and blue stars and stripes, with one out of four stars filled in blue to recognize the 25 percent of our service members who live with the disease.

“We wanted to take the opportunity to thank our veterans for their service to our country, but also bring awareness to the number of our heroes who live with diabetes,” said Reed. “Our paint scheme this weekend serves as a way to remember those who have fought for our freedom, but also reminds us all how important it is to manage our health so we can live our lives to the fullest.”

To encourage those living with diabetes to actively manage the disease by talking frequently with their doctor and reaching out to family and friends for encouragement and support, Reed and partners Lilly Diabetes and the American Diabetes Association take their #IDriveMyHealth Show Car Tour to Charlotte this weekend.

The Show Car Tour first stops at Roush Fenway Racing Fan Day on Thursday, May 26th from 8 a.m. – 3 p.m. and moves on to the Speed Street festival in Uptown Charlotte on Friday, May 27th and Saturday, May 28th. Reed will appear at Speed Street at the No. 16 show car on Friday from 1-3 p.m. and NASCAR’s first officially licensed artist, Sam Bass, will appear on Saturday from 5-6 p.m.

Further awareness efforts include an opportunity for NASCAR fans to be a part of Reed’s paint scheme in November during American Diabetes Month. Fans are encouraged to share how and why they manage their health using #IDriveMyHealth on social media and at the Lilly Diabetes #IDriveMyHealth Show Car Tour stops throughout the year.

Kicking off last weekend during the Coke 600, NASCAR: An American Salute features various on- and off-track activities from tracks, teams and partners that show appreciation and support for the troops, and culminates Independence Day Weekend at Daytona International Speedway (DIS).  Reed and the No. 16 team will sport this special scheme again at DIS in July.

The Drive to Stop Diabetes campaign strives to educate people about living well with diabetes. The campaign encourages the millions of Americans who have diabetes to talk about a management plan with their doctor, family and friends and to lead healthy lives.

The American Diabetes Association is leading the fight to Stop Diabetes® and its deadly consequences and fighting for those affected by diabetes. The Association funds research to prevent, cure and manage diabetes; delivers services to hundreds of communities; provides objective and credible information; and gives voice to those denied their rights because of diabetes. Founded in 1940, the Association’s mission is to prevent and cure diabetes, and to improve the lives of all people affected by diabetes. For more information, please call the American Diabetes Association at 1-800-DIABETES (1-800-342-2383) or visit diabetes.org. Information from both of these sources is available in English and Spanish.