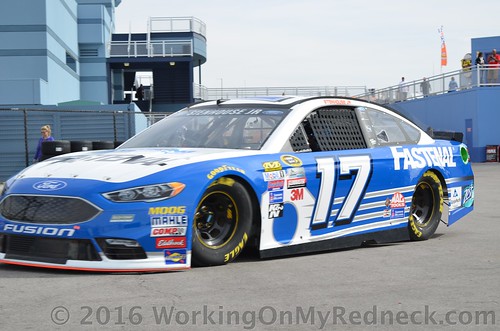 Roush Fenway Racing has secured a multi-year partnership extension with primary partner the Fastenal Company that will continue Fastenal’s position as the anchor partner of the No. 17 NASCAR Sprint Cup Series team and driver Ricky Stenhouse Jr.  As part of the extension, Fastenal will also increase the number of its primary races in 2017 and beyond.

“We are really excited to announce that Fastenal will remain the anchor partner of the No. 17 team for years to come,” said driver Ricky Stenhouse Jr. “Fastenal is a first-class organization with values that align completely with myself and this race team.

“We’ve seen a lot of improvement across the board this year,” added Stenhouse. “We are very happy that Fastenal will continue to be a part of the momentum at Roush Fenway. There has been a lot of hard work and effort put into this team and our goal and expectation is to reward Fastenal with a trip to victory lane and the Chase in the near future.”

Fastenal is currently in its fifth season as a primary partner in Roush Fenway’s Sprint Cup stable, and its second full season as the anchor partner on Stenhouse’s No. 17 Ford Fusion.

“To have a company of the caliber of Fastenal recognize the long-term value of a partnership with Roush Fenway, Ricky and the No. 17 team is gratifying for our entire organization,” said Roush Fenway president Steve Newmark. “During our relationship, Fastenal has created and implemented a robust and impactful motorsports marketing program, and we are thrilled to have Fastenal continue to be a key part of the Roush Fenway family now and in the future.”

Fastenal, which boasts 2,600 stores nationwide, first joined Roush Fenway as a primary partner in 2010 in the NASCAR XFINITY Series.

“We are truly looking forward to continuing our partnership with Roush Fenway Racing as the anchor sponsor of the No. 17,” said Fastenal President and CEO Dan Florness.  “Ricky has done an excellent job representing our brand – both on and off the track – and we are extremely proud of the relationship we have built with Ricky, Jack Roush and everyone at Roush Fenway Racing.”

“Extending our partnership reflects our belief in Roush Fenway Racing,” said Florness.  “The NASCAR program has helped us grow our business and excite our employees, and we feel a strong connection with the NASCAR community and fan base.”