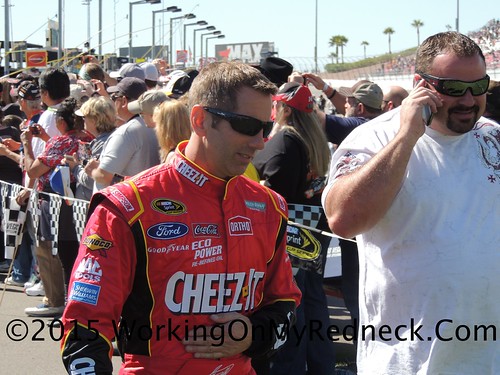 Greg Biffle dominated the first 20-lap segment of the Showdown in his No. 16 Ford, leading all 20 laps to advance to the Sprint All-Star race.  With his advancement Biffle made his 12th consecutive appearance in the All-Star race and continued Roush Fenway’s 26-year streak of having at least one car in the event.

After racing his way into the main event by winning the opening segment of the Sprint Showdown Friday night, Biffle qualified on the outside pole for the All-Star race with the help of a fast pit stop by his team.  Handling on the No. 16 Ford proved to be a challenge during the race causing Biffle to brush the wall in the opening segment leaving an uphill battle for the team.  Despite the damage, the team kept adjusting on their Ford and Biffle was able to finish 13th.

The Greg Biffle Foundation is thrilled to announce a special fan promotion for the 2017 NASCAR Pets Calendar. Three lucky winners and their pets, along with one charity winner selected by The NASCAR Foundation, will grace one page of the 2017 calendar for the first time ever.  Visitwww.gregbifflefoundation.com for more information on entering.

Biffle on the Showdown:

“Night races are always exciting, especially in front of all our family and friends here in Charlotte.  I feel confident that we can go out there and race our way into the All-Star race again this year.”