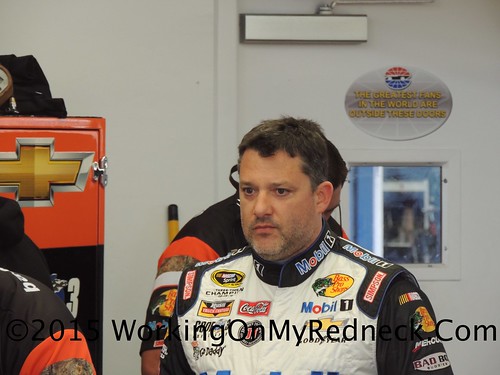 KANNAPOLIS, North Carolina (May 17, 2016) – It wasn’t about the boatloads of money or the trophy. In fact, it really wasn’t about standing in victory lane for Tony Stewart that night in May 2009 when he won his only NASCAR Sprint All-Star Race at Charlotte (N.C.) Motor Speedway.

To Stewart, that victory was about one person: Gene Haas.

The trip to victory lane was the first for Haas, who began his NASCAR organization in 2002, then added Stewart as a co-owner in 2009 to form Stewart-Haas Racing (SHR).

“What was so exciting wasn’t the $1 million dollars that we had just won, it was knowing that we had just won with a new partner,” said Stewart who passed Matt Kenseth on lap 98 of the 100-lap event, then edged Kenseth at the finish line by .971 of a second.

“To be able to give Gene (Haas) his first win, especially in that fashion, to win a $1 million payday and see him in victory lane was the most gratifying part of it. It was cool to win it, but to win it for Gene was the ultimate perk of the whole weekend, to see him smiling, finally seeing the results for all his hard work over the years.”

The victory was historically significant. It was Stewart’s first as a driver-owner with SHR. It marked the first victory for a driver-owner since Ricky Rudd won a points-paying race in October 1998 at Martinsville (Va.) Speedway. It was also the first All-Star Race win for Stewart, who had six top-10 finishes in 10 previous All-Star starts. Stewart became only the second driver-owner to win the All-Star Race, joining Geoff Bodine, who accomplished the feat in 1994.

Like Humphrey Bogart and Claude Rains when they walked off into the fog in the final scene of the classic movie Casablanca, the 2009 All-Star Race was the start of a “beautiful friendship” between Stewart and Haas. Since then, Stewart has gone on to notch 16 more victories – 15 points-paying wins and the 2012 Budweiser Duel – plus a championship. SHR has won 31 points races and 28 poles, earned a second title with Kevin Harvick in 2014, and became one of the top teams in the sport.

Stewart will drive the No. 14 Bass Pro Shops/Tracker Boats Chevrolet SS Saturday night in his 18th consecutive and final Sprint All-Star race when he returns to the scene where SHR’s winning ways began. Only three drivers have more consecutive starts in the event, and Stewart hopes a victory will propel him like 2009’s win did when he won four of the next 18 races.

There are three segments in this year’s Sprint All-Star Race – a 50-lap opening segment, a 50-lap second segment and a 13-lap final dash to the finish with a unique rule. For the first time in the event’s history, the starting order for the final segment will be determined following a random draw that decides if the top-running nine, 10 or 11 cars have to pit for a mandatory four-tire stop between second and third segments. Pit road will be closed for all other cars, and those for which pit stops are mandated must resume position for the final sprint, lining up behind the cars that did not pit. It is expected to create an unpredictable, no-holds-barred rush to the checkered flag and All-Star history.

Stewart said he is likely to review the new race rules with his crew chief Mike Bugarewicz before the green flag falls Saturday night.

“I normally sit in the driver’s meeting and I don’t totally understand it,” he said. “When we get out of the driver’s meeting, I ask the crew chief to re-explain it because there are a lot of moving parts. That’s what’s cool about the All-Star Race. It’s not the same as we run every week or anywhere else. It’s a unique race and a unique format and it’s a really cool deal for the fans to see.”

With no points and a $1 million payday on the line, the All-Star Race is an event that satisfies both the driver and owner. So, it’s tailor-made for Stewart, and maybe, just maybe, the start of something really cool when the Sprint Cup cars return to Charlotte May 29 for the Coca-Cola 600.