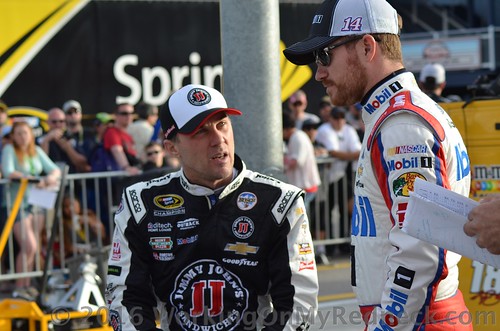 Kevin Harvick, driver of the No. 4 Jimmy John’s Chevrolet SS for Stewart-Haas Racing (SHR), raced his way through an up-and-down day that started from the pole and ended with severe damage to finish 15th and expand his series points lead from four to 21 points in Sunday’s AAA 400 Drive for Autism NASCAR Sprint Cup Series race at Dover (Del.) International Speedway.

The 2014 NASCAR Sprint Cup Series champion started from the pole position after rain cancelled Sprint Cup qualifying on Friday afternoon and starting positions were awarded based on practice speed.

The Bakersfield, California, native got off to a fast start and led 114 of the first 118 laps of the race. Harvick brought the No. 4 Chevrolet to pit road for four tires and fuel under caution on lap 120 and returned to racing in the third position after the No. 19 and No. 20 beat him back onto the track.

Harvick continued his march inside the top-five until the fourth caution flag waved on lap 174. He brought the Jimmy John’s Chevrolet for a four-tire pit stop, but several teams employed either a two-tire strategy or stayed out. As a result, Harvick was forced to restart in the 12th position on lap 178.

The Sprint Cup points leader worked his way back inside the top-10 and was racing in ninth on lap 214 when a Reed Sorenson accident in turn three brought out the sixth caution of the afternoon. Sorenson’s wreck caused Jimmie Johnson to spin in front of Harvick, who came to a complete stop on the racetrack to avoid being collected. The evasive maneuver worked to avoid contact but dropped the No. 4 back to the 20th position for the lap-219 restart.

Harvick methodically raced his way through the field and up to the fourth position by lap 285.  It appeared that his pit crew was just not up to the task of keeping his track position after each pit stop!

Unfortunately, Harvick was collected in an 18-car accident that occurred following a lap-355 restart. The No. 4 car suffered front and rear-end damage and reported to pit road for repairs. NASCAR threw the red flag to clean up the racetrack, and Harvick and the No. 4 team were penalized one lap for coming to pit road early. After several stops for repairs, Harvick rejoined the race in the 17th position as the first car one lap down.

Another accident on the following restart resulted in the 12th and final caution of the afternoon on lap 361. The quick caution allowed Harvick to receive the Lucky Dog and return to the lead lap for the final restart on lap 366, but damage to the No. 4 was so extensive that Harvick had little hope of gaining additional positions. He fell a lap down to the leaders in the closing laps and crossed the finish line in 15th.

“We had a good Jimmy John’s Chevrolet,” said crew chief Rodney Childers, who led Harvick and the No. 4 team to victory in the Sprint Cup race at Dover in October 2015. “We had driven from 20th back to fourth there before the caution. You had a couple of guys stay out and caused a big mess on the restart and got tore up. The guys did good on pit road to keep it out there and keep it going and at least get a decent finish out of it.”

Harvick led on three occasions for a race-high total of 117 laps to bring his series-best laps-led total to 688 in 2016.

Kurt Busch in the No. 41 Haas Automation/Monster Energy Chevrolet SS led the four-car SHR contingent on Sunday afternoon at Dover by finishing fifth.

Danica Patrick, driver of the No. 10 Nature’s Bakery/Autism Delaware Chevrolet SS for SHR, finished 13th for her first top-15 finish of the season and her second top-15 in eight career starts at Dover.

Tony Stewart, driver of the No. 14 Code 3 Associates/Mobil 1 Chevrolet SS for SHR, finished 34th in just his fourth race back from injury. Suspension issues sent Stewart to the Sprint Cup garage at lap 342 and eliminated the team from contention in Stewart’s 34th career start at Dover.

Matt Kenseth won the AAA 400 Drive for Autism to score his 37th career Sprint Cup victory, his first of the season and his third at Dover.

Kyle Larson finished .187 of a second behind Kenseth in the runner-up spot, with Chase Elliott, Kasey Kahne and Busch rounding out the top-five. Brad Keselowski, Denny Hamlin, Ryan Blaney, Martin Truex Jr. and Trevor Bayne comprised the remainder of the top-10.

There were 12 caution periods for 65 laps, with 11 drivers failing to finish the 400-lap race around the 1-mile, concrete oval.

With round 12 of 36 complete, Harvick leads SHR in the championship point standings with 418, 21 ahead of second-place Kyle Busch. Kurt Busch is 3rd with 386 points, 32 points out of first. Patrick is 23rd with 216 points, 202 out of first. Stewart is 37th with 94 points and currently sits 67 points behind 30th-place David Ragan. Stewart is hoping to win a race over the course of the next 16 races and make it within the top-30 in the standings in order to earn a berth in the Chase for the Sprint Cup playoff in his final season.