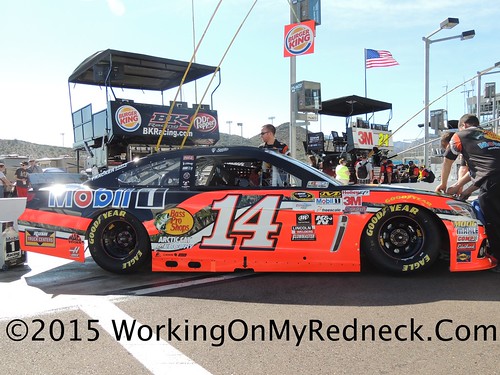 Stewart raced his backup car as high as 15th midway through Sunday’s race and looked to be in contention for a top-10 finish before the car’s track bar broke, rupturing an oil line and ending his race with 58 laps to go.

“The track bar broke, and the back of the car flops back and forth,” Stewart said. “I don’t know what more there is to say about that. We had been fighting – the car was acting weird for the last 80 to 100 laps. I’m sure it was already starting to break, and it finally just broke the rest of the way.”

Stewart started the 400-mile race on The Monster Mile in 34th but advanced to 21st by the competition caution on lap 40. The No. 14 held its ground the next 150 laps, escaping serious damage when Stewart and Aric Almirola made contact at lap 130. All 40 drivers found it difficult to pass in traffic on the ultra-fast, narrow track.

Stewart climbed into the top-15 near the race’s halfway mark as the team worked to improve the handling. A scary moment at lap 241 saw the No. 14 break loose in turn two and head to the wall before Stewart reigned it in and resumed the race. As the race neared the finish, Stewart raced in 22nd. His team began preparing strategy for the final laps, but those plans were dashed when Stewart came over the radio to report the mechanical trouble. He stopped on pit lane before the team sent him to the garage, ending the No. 14’s race.

It was a rough weekend in Dover for SHR.

Six minutes after practice began Friday, a mechanical problem on SHR teammate Danica Patrick’s No. 10 Nature’s Bakery/Autism Chevrolet SS caused it to spin at the exit of turn four. Her car dumped oil onto the track and caught fire. Behind Patrick, Stewart hit the oil, as did Jamie McMurray. Both of them had hard contact with the wall, while Patrick’s car kept burning as it went around on the frontstretch. All three drivers were able to climb from their cars and were later released from care center. The No. 14 crew rolled out the backup car, and Stewart logged a few laps in the final minutes of practice. Rain cancelled the qualifying session scheduled for that afternoon, forcing NASCAR to set the starting order based on practice speeds and relegating Stewart to the 34th starting spot.

Patrick finished 13th for her first top-15 finish of the season and her second top-15 in eight career starts at Dover.

Matt Kenseth won the AAA 400 Drive for Autism to score his 37th career Sprint Cup victory, his first of the season and his third at Dover.

Kyle Larson finished .187 of a second behind Kenseth in the runner-up spot, with Chase Elliott, Kasey Kahne and Busch rounding out the top-five. Brad Keselowski, Denny Hamlin, Ryan Blaney, Martin Truex Jr. and Trevor Bayne comprised the remainder of the top-10.

There were 12 caution periods for 65 laps, with 11 drivers failing to finish the 400-lap race around the 1-mile, concrete oval.

With round 12 of 36 complete, Harvick leads SHR in the championship point standings with 418, 21 ahead of second-place Kyle Busch. Kurt Busch is 3rd with 386 points, 32 points out of first. Patrick is 23rd with 216 points, 202 out of first. Stewart is 37th with 94 points and currently sits 67 points behind 30th-place David Ragan. Stewart is hoping to win a race over the course of the next 16 races and make it within the top-30 in the standings in order to earn a berth in the Chase for the Sprint Cup playoff in his final season.

The next event on the Sprint Cup schedule is the NASCAR Sprint All-Star Race on Saturday, May 21, at Charlotte (N.C.) Motor Speedway. Coverage of the non-points-paying event begins at 7 p.m. EDT with live coverage provided by FOX Sports 1.