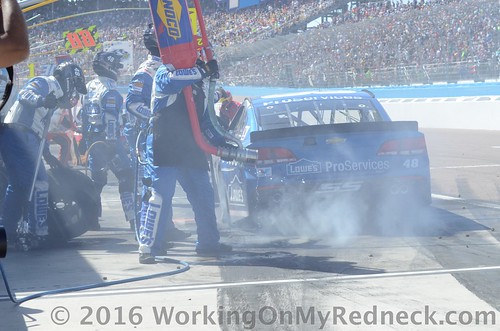 Rules outlining the 2016 versions of the Sprint All-Star Race and Sprint Showdown at Charlotte Motor Speedway were announced Friday, and NASCAR’s annual All-Star Race will once again include a dramatic final segment to determine a $1 million prize winner.

There are three segments in this year’s Sprint All-Star Race — a 50-lap opening segment, a 50-lap second segment and a 13-lap final dash to the finish with a unique rule.

For the first time in the event’s history, the starting order for the final segment will be determined following a random draw that decides if the top running nine, 10 or 11 cars have to pit for a mandatory four-tire stop between Segment 2 and Segment 3. Pit road will be closed for all other cars, and those for which pit stops were mandated must resume position for the final sprint, lining up behind the cars that did not pit — creating an unpredictable, no-holds-barred rush to the checkered flag and All-Star history.

“The NASCAR Sprint All-Star Race has always been a special race for our sport and I believe this year’s format may offer up the best race to date,” 2012 NASCARSprint Cup Series champion Brad Keselowski said in a track release. “I hope to be the one with a million-dollar check at the end. The last segment is sure to demand the ultimate performance. Winning the last segment will require the driver to masterfully navigate traffic and hunt down the leader, or hold off the best drivers with an ill-handling car on old tires with everything on the line.”

Fans will again have the opportunity to select at least one driver through the popular Sprint Fan Vote, which will fill any remaining starting spots until the field reaches a minimum of 20 cars.

“We worked with NASCAR and talked to several drivers to gather feedback for what they thought would make the very best race for the fans,” Charlotte Motor SpeedwayPresident and General Manager Marcus Smith said. “The drivers don’t all agree on the perfect strategy, which means some drivers will be fighting on race-worn tires to stay up front at the end, while others will be charging through the field on new tires after the final pit stop.

“At the end of the final shootout, one driver will have a million reasons why ’13’ is a lucky number.”

Additional rules are as follows:

• Starting order for the opening 50-lap segment for the All-Star Race will be determined by qualifying, and includes a mandatory green flag pit stop with a minimum of two tires.

• A break between Segment 1 and Segment 2 includes a mandatory pit stop with a minimum of two tires. The exit off pit road following that stop sets the starting order for Segment 2.

• During the 50-lap second segment, cars must make a green-flag pit stop and change a minimum of two tires prior to Lap 85.

The Sprint Showdown includes three total segments of 20 laps, 20 laps and 10 laps. The winner of each of those sprints earns a start in the All-Star Race.

Additional rules for the Sprint Showdown:

• Starting order for the first 20-lapper will be set by practice speeds, and the winner advances to the All-Star Race (and sits out Segments 2 and 3 of the Showdown).

• The second 20-lap segment starting order will be set according to pit road order after a mandatory pit stop for a minimum of two tires. Again, the winner of that segment will automatically advance to the All-Star Race and sit out the final segment.

• The winner of the final 10-lapper will also advance to the All-Star Race, with the starting order if this segment again set by pit road order following a mandatory pit stop for a minimum of two tires.

This sounds like a very interesting and highly competitive evening of racing for one million dollars!