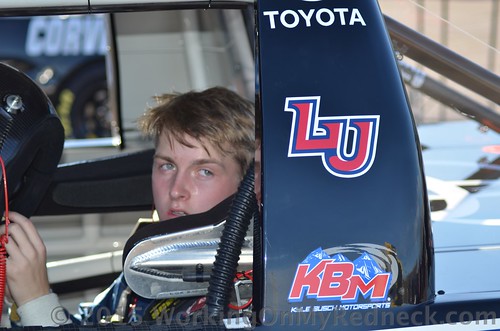 Byron has a win in the series he watched as a child. But it took a strong truck and a large stroke of good luck for Byron to win Friday night’s Toyota Tundra 250 and reach Victory Lane at Kansas Speedway for the first time in five series starts.

Driving the No. 9 Toyota for Kyle Busch Motorsports, Byron was third when frontrunner Johnny Sauter led Ben Rhodes into Turn 3 on the final lap of overtime.

Rhodes drove his No. 41 Tundra hard to the inside of Sauter’s No. 21 Chevrolet, clipped the left rear quarter panel of Sauter’s truck and sent both vehicles spinning toward the outside wall. When NASCAR threw the 11th caution of the race, Byron had the lead, and two-time series champion Matt Crafton was running second.

“I just got ran over by a bozo … I guess he’s just brain dead,” an irate Sauter said after the incident. “It’s just unfortunate that sometimes you can’t race the way you want to.”

For Byron, who became the ninth NASCAR Next driver to win a national series race, there was only joy.

“It was crazy the last couple of restarts, and I had the lead there on the green-flag run (before the caution that forced overtime), and I was really just praying for no cautions, but you have to earn it,” Byron said.

“And my crew chief, Rudy Fugle, really told me about that on all the restarts. He’s like, ‘This is how you earn it,’ so I just can’t thank (sponsor) Liberty University enough. This is a dream come true. I was six years old watching Truck races. Didn’t start racing until I was 14, and just to be in a Toyota Tundra like this is amazing.”

The last lap wreck wasn’t the first time in the race Byron benefitted from contact between two trucks in front of him. Moments after a restart on Lap 135, the Toyotas of Crafton and Timothy Peters collided, breaking the momentum of both trucks and shuffling them out of the top 10.

Byron inherited the lead, shed eventual fourth-place finisher Christopher Bell after a brief battle and streaked away to a lead of 4.5 seconds before caution for Tyler Reddick’s spin on Lap 164 of a scheduled 167 forced the overtime and bunched the field.

Sauter took full advantage of the restart in overtime, diving to the inside and surging into the lead with Rhodes passing Byron for second in the process. Sauter appeared to have the race in hand until Rhodes made his kamikaze move and wrecked the leader in the final pair of corners.

With this victory, Byron is all but assured of qualifying for the first Camping World Truck Series Chase. … Peters finished eight and holds an eight-point lead in the series standings over Daniel Hemric, who ran third on Friday night.

Next week it is on to Dover for another exciting round of racing.

Check out the unofficial results from the Toyota Tundara 250.