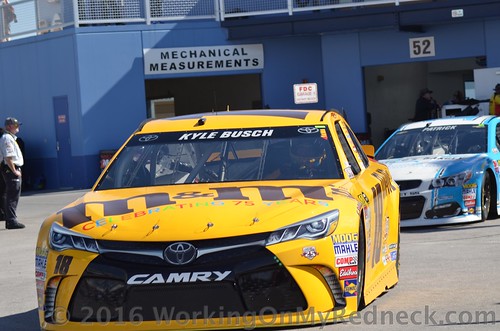 Kyle Busch came to Martinsville Speedway this weekend with no grandfather clock trophies from the shortest and tightest of the NASCAR Sprint Cup Series short tracks.

He left with two clocks after completing an unprecedented Martinsville sweep in Sunday’s STP 500, and, appropriately, the first question he radioed to his crew after his celebratory burnouts dealt with telling time.

“What time is it?” crowed the reigning series champion, who a day earlier had won the NASCAR Camping World Truck Series race at Martinsville in his own equipment.

Then Busch answered his own rhetorical question. “Time to tell the haters to shut up!” Busch shouted, a reference to the ambivalent relationship the Joe Gibbs Racing driver enjoys with the NASCAR fan base.

But Busch can be forgiven for his over-the-top exclamation. With the victory, he’s all but assured of defending his 2015 championship in this year’s Chase for the NASCAR Sprint Cup.

“I can’t say enough about this whole JGR team,” who led the final 174 laps after passing teammate Matt Kenseth for the top spot on Lap 327. The (No. 18) M&M’s Camry was awesome in practice (on Saturday). We had a really good car through practice, and (crew chief) Adam (Stevens) made some really good adjustments overnight to keep us where we needed to be, running up front all day.”

In fact, Busch led 352 of the 500 laps on the way to his first victory of the season and the 35th of his career. The 352 laps led were the most at Martinsville since Bobby Hamilton dominated the Apr. 20, 1998 Sprint Cup race at the .526-mile track, winning from the pole and leading 378 circuits.

For the final restart on Lap 489, after caution had slowed the race for the eighth time when Jamie McMurray shredded a tire and lost control in Turn 2, Busch pulled away to cross the finish line .663 seconds ahead of AJ Allmendinger, who matched his career-best Sprint Cup finish on an oval track, with his previous second place coming at Martinsville in 2012.

Moreover, it was Allmendinger’s first top five since he won at the Watkins Glen International road course in August 2014 and qualified for the Chase for the only time in his career.

“God, I wish we had one more spot,” said Allmendinger, who restarted third with 12 laps left, forced his way past Kenseth and spent the final 10 laps in an all-out — albeit futile — attempt to run down Busch before the finish.

“We got our car really, really good on the long runs. That’s kind of where I thought we shined. We didn’t have great short-run speed, but after about 30, 40 laps we could really get rolling there. I was kind of hoping we’d stay green the last 120 laps. I figured that wasn’t going to happen, but I was praying we had a shot at that, because I felt like, if that happened, we had a great chance to win the race.”

Kyle Larson, who, like Busch, competed in Saturday’s truck race, used the extra track time to full benefit in finishing third, one spot ahead of Austin Dillon, who stayed out on old tires for the final restart (as did Busch, Kenseth and Allmendinger) and held the fourth position.

Brad Keselowski recovered from a Lap 93 pit road speeding penalty to run fifth. Carl Edwards, who started 25th and spent much of the race a lap down, fought back to finish sixth. Brian Vickers, Paul Menard, Jimmie Johnson and Ryan Newman completed the top 10.

Polesitter Joey Logano struggled with the handling of his car from the outside. Busch put him a lap down on Lap 76, but Logano recovered to finish 11th, despite damage to the nose of the No. 22 Ford—so much so that he finished the race with his hood flapping above the engine compartment.

Denny Hamlin, like Logano a pre-race favorite, wheel-hopped his No. 11 Toyota into the Turn 1 wall on Lap 220 and retired from the race in 39th place.

Dale Earnhardt Jr. and Kevin Harvick were shuffled back during the final restart and finished 14th and 17th, respectively. Harvick retained the series lead by four points over Johnson and five points over Busch.

Hung on the outside on the final restart, Kenseth dropped to 15th after Allmendinger passed him. Danica Patrick came home 16th, her best result so far this season.

Next week is the first night race of the year as the teams roll into the Texas Motor Speedway.

Harvick And The Quarter Finals