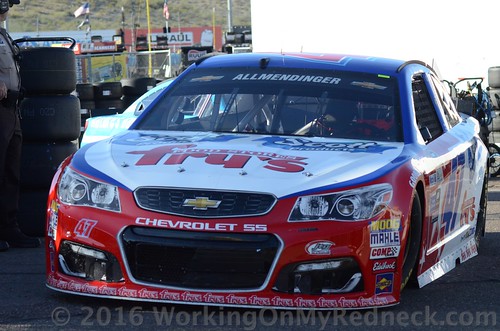 In Martinsville Speedway’s STP 500, Allmendinger trailed winner Kyle Busch by a mere 0.663 second at the checkered flag and the 34-year-old driver believed a long-run to the finish could have produced a different outcome.

“We got our car really, really good on the long runs. That’s kind of where I thought we shined,” Allmendinger said. “We didn’t have great short-run speed, but after about 30, 40 laps we could really get rolling there. I was kind of hoping we’d stay green the last 120 laps. I felt like if that happened we had a great chance to win the race.”

Martinsville, however, remained true to form and had three caution flags in the final 115 laps. Allmendinger’s final pit stop came with about 35 laps remaining during the seventh of eight caution flags and it was adjustments during that stop that allowed him to close on Busch.

“At that point, our short-run car wasn’t great,” Allmendinger said, “so (crew chief) Randall Burnett made a great adjustment there to try to be a little bit better on the short run, and it was pretty good on those restarts.”

Allmendinger’s performance Sunday was his best since he snared his first career Sprint Cup victory at the Watkins Glen International road course in August 2014. And it came on the heels of the three-race West Coast swing in which Allmendinger recorded finishes of 14th, 17th and eighth.

“Really, starting at the West Coast swing and coming through here, I feel like we’ve been at our best at the end of the races,” Allmendinger said. “I’ve really felt like the last four races we’ve been able to put together whole races. Fontana (Calif.) and here we had really fast race cars. We’re getting there. The biggest thing, especially with a team like ours, is when you have a good race car you’ve got to capitalize on it.”

“(Last year) we didn’t have the personnel to have the cars where we needed them when they left the race shop,” Allmendinger said. “Ernie is really good. He’s had a relationship with RCR (Richard Childress Racing) working there, and, obviously, when he worked with Kevin Harvick and they had the truck and Busch teams at the time. So he’s been really good about making sure we got what we need for the race cars and built the way they need to be to the specs that he wants them and things like that.”

JTG-Daugherty has an alliance with Richard Childress Racing.

Allmendinger noted Burnett calms him and Burns and Palmer have embraced their new roles instead of feeling as if they were demoted.

It would just be what the doctor ordered if “The Dinger” and his JTG-Daugherty race team could have a few more great finishes prior to the road courses, in which Allmenginger should fare very well this year.  AJ has just one Sprint Cup victory and it was on the road course at The Glen, which was an extremely thrilling finish.

Could this be the year that Allmendinger runs the table on the road course circuits?