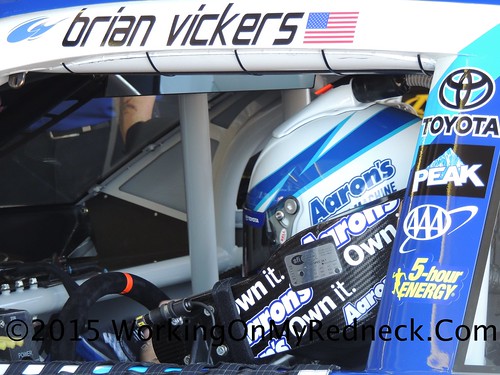 This morning all of the NASCAR Sprint Cup cars rolled out onto the race track for their first practice session of 2016.  As always each year there is the Monday morning quarterbacking as to which car in the garage will be the car to beat in next Sunday’s Great American Race, better known as the Daytona 500.  So that really becomes the obvious storyline for the week leading up to the Daytona 500 each year.

However, this year was supposed the grand celebration, and farewell tour, for Tony Stewart.  It was supposed to be a year of Smoke acknowledging his loyal race fans at each and every race track on the circuit.  It was going to be another year of the race fans saying goodbye to a three-time Sprint Cup champion.  It was supposed to be the final time that Tony would have an opportunity to win the one race that has eluded Smoke his entire career, the Daytona 500.

Because of Smoke’s off season sand rail accident at Glamis, CA, that storyline, Smoke winning the Daytona 500, will not be fulfilled.  Instead, he will be watching the race from his home, not behind the wheel of his familiar SHR #14 Chevy.  Now the Stewart injury becomes one of two major storylines that unfolded at Daytona.

The second major storyline, and I may add a very positive feel-good story, is the fact that Brian Vickers was selected to replace Tony at Daytona.  This story alone had its particular challenges.  After all of Vickers previous issues with blood clots, and the fact that all the good seats were taken relegated Vickers to the sidelines for 2016.  In fact, the reality was that Brian probably was finished being a race car driver at the upper levels of NASCAR.

But shortly after Stewart’s accident Stewart Haas Racing contacted Vickers about filling in for Smoke at Daytona.  Obviously it was a phone call that Vickers thought he would never get again, so there must have been great excitement1  So the game quickly grabbed high gear, time was of the essence because Vickers needed to be cleared by both his physicians and NASCAR in order to race at Daytona.

Yesterday, the day that all the Sprint Cup teams rolled into Daytona, SHR convened a press conference to acknowledge what everyone already knew.  It was announced that Brian was cleared by his doctors and NASCAR to race, and that SHR was putting Vickers in the seat of the Stewart Haas Racing #14 Chevy for Daytona.

So once again as the season starts there is a storyline that just two weeks ago was totally unforeseen!  Not only will the garage talk be who has the fastest car for the Daytona 500, but also there will be daily and weekly talk about Stewart’s progress, evaluating Vickers return to Sprint cup racing, and how is the driver filling Smoke’s seat weekly doing.

So let the tongues wag, let the fans root for their driver, let the talking heads talk, let the fans unload their money at the concessionaire’s cash register, but most importantly let the big dog eat!