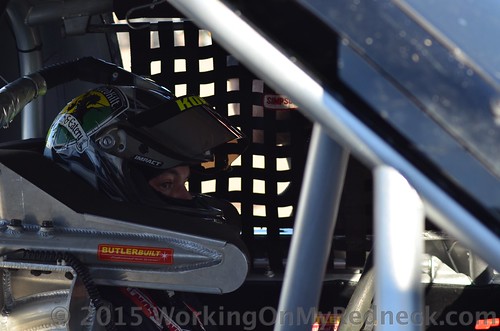 Lira Motorsports welcomes a new face, Korbin Forrister, to their stable for 2016 season.  His  face is a recognizable one in the Camping World Truck Series, after his rookie debut and a top 20 finish in the points last year. Forrister, a prodigy who started racing dirt tracks at a very young age, is up for the challenge of training with, and competing against, some of the biggest names in NASCAR. Forrister is also extremely enthusiastic about all of the new opportunities that are coming his way in 2016.

On January 29, 2016, Forrister made a powerful career move signing with Lira Motorsports. For Korbin to sit down with Carlos Lira and find they share a similar vision for the future made quite an impression on the young, motivated driver.

“I just feel so blessed to have this opportunity” Forrister acknowledges.  Clearly eager for the start of the upcoming season, Forrister further elaborated, “Lira Motorsports has the ability to run up front in both the NASCAR truck series and ARCA series.  They are giving me the opportunity to drive in some of the best equipment you could get your hands on.”

Korbin will be running in the Camping World Truck Series in Daytona, Atlanta, and Martinsville to start off the season, followed by a race in the ARCA series at Talladega.  The Cedartown, GA native concedes that with his new association with Lira Motorsports, and their tight connection to Roush Fenway Racing, that there will be a lot of pressure on him to perform well.  However he is confident that he is in the right position to achieve the best results.

“I am putting 100% focus on preparing myself and getting ready for Daytona,” he says. “I’ll be giving my absolute best effort so I can go run more races with those guys. I am so grateful to Carlos Lira for giving me this opportunity.”

It appears that Korbin is positioning himself for a run at finishing in the top ten in points for the 2016 Camping World Truck Series.  Keep your eyes on this young man.