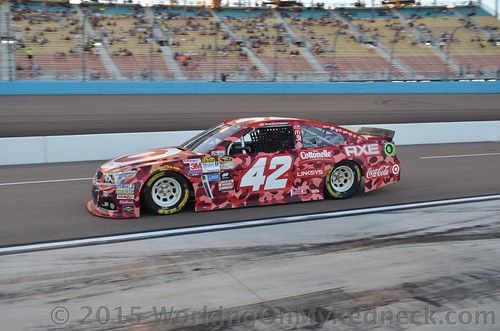 NASCAR team owner Chip Ganassi has refused to rule out a future switch from Chevrolet to Ford in the NASCAR Sprint Cup, having strengthened its ties with the manufacturer ahead of the 2016 season.

CGR has been synonymous with Chevrolet in NASCAR, but the team is strengthening its ties with Ford after joining forces to spearhead its new Le Mans and World Endurance Championship program, having worked together during the Daytona Prototype sports car era. It (CGR) also enjoys success in IndyCar using Honda engines.

More than a decade has elapsed since Ford’s last manufacturers’ title in 2002 and the American giant is known to be evaluating ways of returning to glory, with a CGR tie-in considered more viable in the wake of its high-profile sports car collaboration.

Though Ganassi maintains he is happy running three programs with three different partners, he suggests there is potential for more homogeny with Ford in the future, saying “I would never say never. I would not rule it out all.”

Such a move would simplify the arrangement between Ganassi and Ford in the USA where its North Carolina based engineers have to be careful to protect the rival brands data, despite Ganassi’s insistence that this has never been an issue.

“I’m happy to run Honda in Indycar, Chevy in NASCAR and Ford in Sports car racing, all the manufacturers we work with are fully aware of my deals with the other manufacturers, I go in with an open book”

“I think that is what it takes to be in this business today. I would compare it to a car dealer that has multiple name plates or a manufacturing company which work for different manufacturers. I think it’s important that they understand that we do not kiss and tell. We try to the best we can for everyone.”

However Ford, which is introducing an updated technical package for the 2016 Sprint Cup season, has hinted that there may be drastic changes in the pipeline for its NASCAR programs in 2016 if the results do not improve.

“Overall we’ve struggled across all of our teams this year. We’re going to be making necessary changes to strengthen everybody’s performance” Ford Performance boss Dave Pericak claimed in the lead up to Speedweeks at Daytona.

Is this a preview of what may come at Chip Ganassi Racing following the 2016 season?  Could we see CGR leave the Chevy stable and slide on over to the Ford camp?  It would make sense to streamline and combine the Ganassi NASCAR manufacturer with his sports car efforts and manufacturer.

However, as the Ganassi states, he is very comfortable with racing with different three manufacturers in the three different disciplines of racing and that Chevy, Ford, and Honda all know that going into the negotiations.