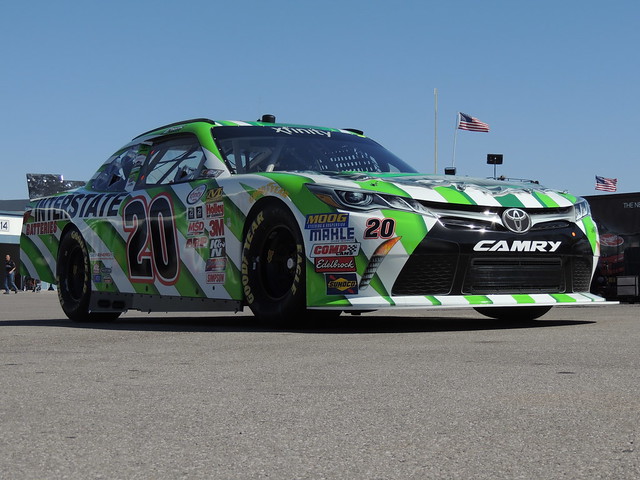 Hamlin, in the Joe Gibbs Racing XFINITY No. 20 Toyota, led a race high 117 laps around “The Lady in Black” in his Joe Gibbs Racing # 20 ride, marking the third time this season he has started and finished an XFINITY race from the pole position.  Hamlin had such a dominating car that there were only a handful of cars that could even get close to the same zip code that the Hamlin was living in all race!

Even though Hamlin Led 117 of 147 laps at the 1.366-mile speedway, he didn’t make the winning pass until Lap 145, when he surged past Daniel Suarez, who was stretching fuel after foregoing a final pit stop in hopes of stealing the victory.

In a 1-2-3 finish for JGR, Kyle Busch got past Suarez, who finished third, to start the final circuit and came home in the runner-up position. But Suarez secured a $100,000 bonus as the top finisher among eligible series regulars in the final XFINITY Dash 4 Cash event of the season.

Suarez also won $100,000 for a Kurt Kolstad, a race fan paired with Suarez for the Dash 4 Cash finale!

When Hamlin brought his No. 20 Toyota to pit road under caution on Lap 72, he returned to the track after a lightning fast stop during which his team left the fuel cell slightly short of a full load.  Unfortunately, that meant Hamlin would have to pit before his primary pursuers, KyBu and Kevin Harvick, and hope the race would run caution-free for the entire cycle of stops.

Hamlin got his wish!

After pitting on Lap 122 and gaining time on fresh tires, a relieved Hamlin saw the race run caution-free to the end, giving him just enough time to catch Suarez, who was saving fuel on old rubber, before the laps ran out and the checkered flag flew.

“I’m almost glad we didn’t (get the car full of fuel),” Hamlin said after the race. “We didn’t want a caution to fall and trap us there, but I had scraped the wall and kind of misjudged my line one time and got a little right-side damage, and the car just stopped turning.

“I don’t know if the right side would have made it or not (under the pressure of all-out racing).”

Check out the unofficial results of the VFW Sport Clips Help A Hero 200.