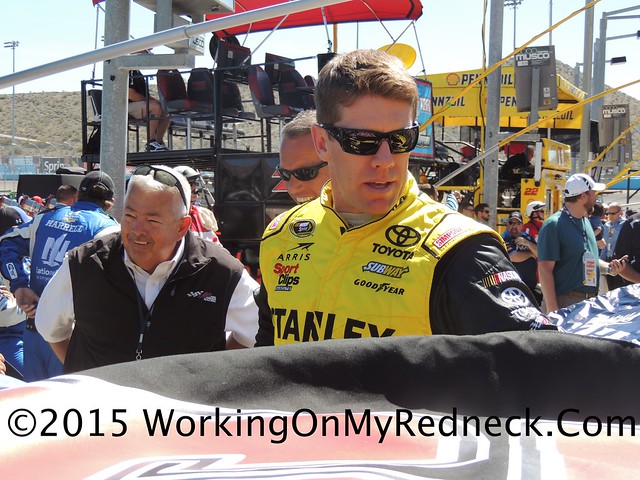 This weekend was hyped and touted as a celebration of the history of Darlington, and also of NASCAR, but nobody could have guessed and guaged just how cool the weekend would be.  To describe the pre-race celebration I can only say that, this weekend, the address of the race track was at the intersection of Nostalgia Blvd. and Present Ave.

On a night when throwback paint schemes recalled NASCAR’s past in vivid color, and a low-downforce aerodynamic package suggested the future direction of the sport, Carl Edwards overcame early misfortune to win an exhilarating race at The Lady in Black.

Grabbing the lead thanks to a blisteringly fast pit stop under the track-record 18th caution of Sunday night’s Bojangles’ Southern 500 at Darlington Raceway, Edwards pulled away after a restart with eight laps left and beat polesitter Brad Keselowski to the finish line by .902 seconds to win his first NASCAR Sprint Cup Series race at the venerable 1.366-mile speedway.

An outspoken proponent of the low-downforce configuration, Edwards was thrilled with the quality of the racing and elated with his second victory of the season and the 25th of his career.

“I don’t think I can get in trouble for how much I liked it, but I loved it – this is as good as it gets,” Edwards said. “This is what it’s about. We’re sliding cars, tires are falling off – this is the style of racing – if there’s any chance we can run this in the Chase, I hope we can do it. It was an awesome day.”

Just for the record, NASCAR will run its standard 2015 competition package throughout the Chase, but the low-downforce configuration got rave reviews from a wide array of competitors!

Edwards’ victory didn’t come without significant adversity. The driver of the No. 19 Joe Gibbs Racing Toyota lost two laps after staying out on old tires when the rest of the lead-lap cars came to pit road under caution on Lap 62.

That decision forced Edwards to pit early on Lap 89, and a subsequent caution for Michael Annett’s crash in Turn 2 trapped him two laps down. Edwards spent the next 200 laps working his way back to the front.

Edwards was locked in an intense three-way battle for the lead when caution for Jeb Burton’s spin in Turn 2 on Lap 355 of 367 took fuel mileage out of the equation and set up the final round of pit stops.

Edwards edged Brad Keselowski for the top spot leaving pit road and parlayed that advantage into a hard-earned victory.

“A win like this is really special, especially leading into the Chase,” Edwards said. “This is what we needed. We just needed a shot in the arm and needed to have a good night like this. All over, it’s cool.

“I hope I never forget those last 25 laps. That was really fun, and the restart was fun, but truly racing with Brad and Kevin was a blast. I really had a good time.”

Next week NASCAR moves north up I-95 to Richmond for the last regular race before The Chase begins.