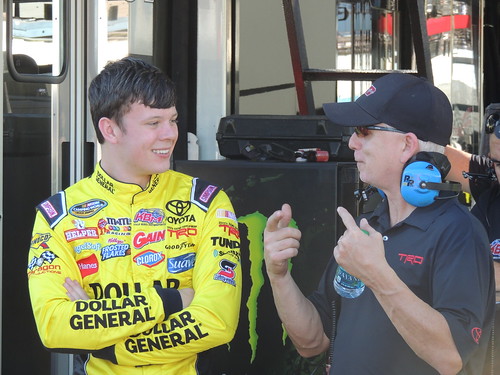 TRD may have learned their lesson when they allowed Kyle Larson to be stolen out from under their corporate umbrella.  The loss of that young driver still has an impact on Toyota’s NASCAR strategy.

With connections to a bevy of prospects, such as Erik Jones and Christopher Bell (who won last month at Eldora Speedway in only his third Camping World Truck Series start), Toyota has placed renewed focus on plotting how to keep youth under its umbrella while climbing the NASCAR ladder.

That wasn’t the case with Larson, who signed with Chip Ganassi Racing before the 2012 season after excelling in sprint cars with Toyota funding. Within two years, Larson, 23, reached the Sprint Cup Series in a Chevrolet fielded by Ganassi.

“(Larson) was very successful in our short-track stuff, loved Toyota, won all kinds of races, but we couldn’t find a home for him, so Chip got him,” Ed Laukes, Toyota Motor Sales USA vice president for marketing, performance and guest experience, recently told NBC Sports. “That was a huge investment in him that ended up leaving.

“We’re trying to make sure that doesn’t happen in the future, so everybody is getting creative to say that if Erik Jones is this phenom that everyone thinks he is, that we try to find a home for him when it comes time for him to go to Cup.”

Jones made his Sprint Cup debut three months ago at Kansas Speedway. He said Friday at Michigan International Speedway that there are no plans for him to run any additional Cup races this season. He is ranked third in the truck standings and has two Xfinity victories. Team owner Joe Gibbs said the plan is to run Jones, 19, full time in Xfinity and part time in Cup next year.

JGR’s Sprint Cup stable is at the four-car capacity and enjoying stability with veterans Kyle Busch, Carl Edwards, Denny Hamlin and Matt Kenseth. So if Jones were ready to make the leap to NASCAR’s premier series in 2017, it might require Gibbs farming him out to a Toyota-affiliated team – which is where the manufacturer would play an important role in brokering a deal.

“We don’t own a team; that’s where it gets tricky,” said Laukes, also a member of Toyota Racing Development’s board of directors. “We don’t get a lot of young, talented drivers who have dads that are gazillionaires wiling to fund their kids. You get into Cup, that number gets big to be writing the check. We’ll do everything in our power to make sure Erik or any other young guys are set.”

Laukes said Toyota also is keeping an eye on Daniel Suarez, 23. The Monterrey, Mexico, native is ranked seventh in Xfinity standings in his rookie season with JGR.

“That’s probably the most underreported story in all of NASCAR,” Laukes said. “He’s racing tracks he’s never been on in his life, and he’s top five and leading races. It shows that if you give him good stuff on a decent track, the kid’s going to be really good. And he’s good for the sport with the Hispanic audience.

“I hope that we can find a runway for all those guys. Everyone has a lot of investment in their future. But we also are very fortunate to have the four guys at Gibbs with Matt, Carl, Kyle and Denny.”

Much of the Toyota blueprint could depend on what happens with Michael Waltrip Racing, whose co-owner Rob Kauffman has agreed to buy a stake in Ganassi’s team. Laukes said Toyota should have clarity within a “couple of weeks” on the future for MWR.  Michael Waltrip Racing  has committed to running a Toyota next year.

“We talked to Rob,” Laukes said. “It’s really going to fall into his court. We don’t have any firm decisions about how that whole thing is going to look. We’re waiting on him to make a final decision.”

If MWR were to leave, it seems probably that Toyota Racing Development would add a team such as Furniture Row Racing (which is seeking a new manufacturer). TRD builds engines for six teams (four for JGR, two for MWR), and Laukes said the company would maintain that supply in ’16.

“Whether they go in MWR cars or into the Gibbs rotation, or another team we partner with down the road, that’s all fluid,” Laukes said. “There’s always conversations going around with (teams) having an interest (in Toyota). Every weekend my phone rings or someone stops by, and we’ve got great relationships with a lot of teams out there.”

From all that has been printed over the past few weeks, it is quite obvious that neither TRD nor JGR will let either of these young guns, Jones or Suarez, escape the umbrella of the Toyota badge.  And was alluded to above, TRD and JGR may have to purchase a ride for, or farm out to another Toyota team, these two talented drivers until there is room at the JGR stables.  The one problem with farming out to another Toyota team, at the present time there is many questions as to who will be part of the TRD team next year.

If Furniture Row Racing slides over to TRD,. then there may be a possibility tath both JGR and TRD would be willing to foot the bill to put one or both of these drivers with that team, and make it a multiple car race team.

The plan may become more visable in the next few weeks!