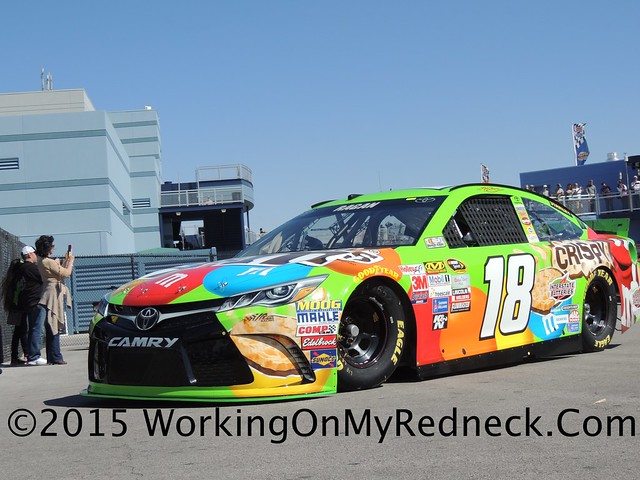 In winning for the third time in eight starts since returning from an 11-race injury absence, Kyle Busch solidified his chances of qualifying for the Chase for the NASCAR Sprint Cup with a serendipitous victory in the 5-Hour ENERGY 301 at the Magic Mile of Louden.

There were two critical moves essential to Busch’s winning for the second time at New Hampshire, and the 32nd time in his career. First was sliding in a patch of oil and thinking he had a tire going flat, Busch brought his car to pit road on Lap 244, sooner than planned. That move allowed Busch to gain time on the track while other contending cars stayed out on old tires. The spur of the moment “strategy” ultimately played out in his favor.

Second, Busch got back on the lead lap with a gutsy pass of race leader Kevin Harvick and second-place Brad Keselowski, weaving through traffic on the frontstretch seconds before NASCAR called a caution for fluid on the track on Lap 251 of 301.

Busch inherited the top spot when the rest of the lead-lap cars came to pit road on Lap 253, and he stayed up front the rest of the way. After taking the white flag, Busch won the race under yellow when Alex Bowman’s accident in Turn 2 on the final lap caused the race’s seventh caution.

Given the discussion on team radios about the probability of that Lap 251 caution being called, Busch felt a strong sense of urgency to make what proved to be the decisive pass.

“I knew I’d been running it hard and I’d been trying to catch (Matt) Kenseth in front of me that entire run, and I had just been so tight that I couldn’t get going and couldn’t get a rhythm going to close in on Kenseth. And I figured I just chewed the right front off of it, because I went into the corner and the thing just went straight one time so I was like, ‘Man, I’m down to cords now, that’s it, it’s done.’

“We shot to pit road and got it changed there, and evidently it was oil on the race track that just made the car slip so bad from out from under me. We got a lucky break and I hauled butt, man, those five laps I ran were five qualifying laps through traffic trying to get back up to the front and pass Harvick to stay on the lead lap. That was our saving bucket right there. That was what we needed to do.”

The offshoot of the victory is that Busch’s hopes of making the Chase now are almost a given. To qualify, he must finish the first 26 races in the top 30 in the NASCAR Sprint Cup Series standings. With seven races left before the cutoff, Busch is 33rd, trailing 30th-place David Gilliland by 58 points.

Kyle has gained about 70 points on Gilliland over the last two races alone!  Therefore, you can extrapolate that gaining the remaining 58 points needed to get into the top 30 in points in the next seven races should not be a problem at all for Kyle, if he continues to perform at this level.