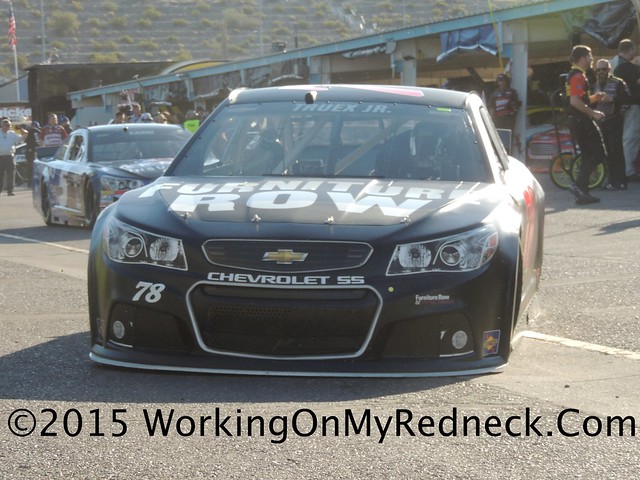 Thge NASCAR manufacturer landscape looks to be changing dramatically for 2016, and Toyota is at the center of the hot rumors!

Expanding, shrinking or standing pat?  That is the big question flating around the NASCAR garage area.

In other words, what in the world will Toyota Racing’s Sprint Cup program look like next year?

One persistent, hot rumor features a manufacturer swap of sorts, with Rob Kauffman, currently the principal owner of Michael Waltrip Racing, taking his racing interests and partnering with a Chevy team. Barney Visser’s Furniture Row Racing is currently eyeing the Toyota camp with an ardor that has progressed well beyond flirtation.

Two potential partnerships mentioned for Kauffman are Chip Ganassi Racing and Richard Childress Racing. Ganassi absorbed Dale Earnhardt Inc. and Martin Truex Jr. into the fold back in 2009. With no fanfare whatsoever, Ganassi finally dropped the Earnhardt name after the 2013 season.

RCR expressed interest in acquiring a minority partner after Chartwell Investments expressed a desire to sell its stake in the company in 2012. In February of this year, RCR put out a release saying it “has advised its employees, drivers and key sponsors that RCR’s minority partner, Chartwell Investments and the Company have hired Houlihan Lokey to assist in exploring strategic alternatives for the sale of its equity position in the Company.”

Kauffman did not offer a definitive reply when asked about a possible realignment.

“We’ve been a Toyota team from the get go and we’re totally focussed on hopefully getting both cars in the Chase,” Kauffman told Motorsport.com. “That’s what it’s all about. Next year will come up next year.”

However, Furniture Row’s Barney Visser has been more forthcoming about their future. The Denver, Colorado-based team owner hopes to make a manufacturer decision in the next few weeks to accommodate a possible restructuring with Toyota for next year.

Although FRR currently receives no financial support from Chevrolet, the team’s move could open the door for Kauffman to enter into a technical alliance with RCR, with whom the No. 78 currently shares data. However, sources told Motorsport.com that Ganassi appears to be the frontrunner for Kauffman’s capital at this time.

Michael Waltrip Racing’s driver lineup likely hinges on Aaron’s continued support with the No. 55 team. Both Kauffman and Clint Bowyer, who is in the first year of a three-year contract, are high on driver David Ragan. Bowyer told Motorsport.com on Saturday he’s “a lot happier” under the new arrangement.

“It’s nice to have a teammate again,” Bowyer said. “David has done a real good job in the 55. They qualify good. We work together like you’re supposed to — and help build a better package.”

Aaron’s has been a sponsor of Michael Waltrip’s since 2000 but has yet to renew with MWR. A decision on the company’s involvement could come in the next six to eight weeks.

Last week Brian Vickers expressed interest in returning to racing. After missing portions of four different seasons since he was diagnosed with blood clots in 2010, Vickers, 31, appeared ready to come back to full-time competition earlier this season. He lasted just two races — Las Vegas and Phoenix — before he was forced to resume using blood thinners.

Given the unpredictability of Vickers situation, Kauffman isn’t sure whether they could accommodate the driver.

“I consider Brian a good friend, and certainly he raced hard for us,” Kauffman said. “We raced sports cars together. But the most important thing right now is his health. I haven’t really had a conversation with him regarding coming back to racing and the like. It’s a big medical issue that I haven’t been involved with up until now.

“He loves racing, so I’m sure he does (want to return), but I think it would be a challenge to try and figure something out–but I would never say never.”

It is the middle of the 36 race season for NASCAR and that usually means that there are changes coming in the near future.  It will be very interesting to see whether Michael Waltrip Racing and Furniture Row Racing remain with their current manufacturer, or will there be a new alignment.  Additionally, the future of Brian Vickers as a driver remains a total mystery.  Nevertheless, these questions will be solved within the next few weeks.