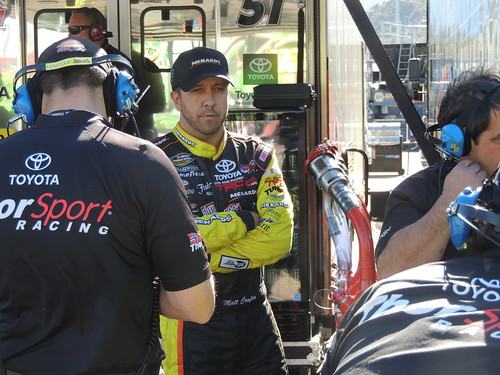 In the previous 19 years of the NASCAR Camping World Truck Series there has never been a back-to-back champion.  Last night the 38 year old Matt Crafton, a native of my birth town, Tulare, CA, wrote his name down in the history books of this series.

Even though Crafton did not win the race, his 9th place finish was good enough for him to secure the 2014 NASCAR Camping World Truck Series championship!

Earning his second driver’s title enabled Crafton to join some might fine company such as Todd Bodine, Ron Hornaday, and Jack Sprague as two-time NCWTS champions.

“It’s awesome,” Crafton said. “To say that I’ve done it back-to-back and no one has done that, it’s such a good, good feeling. Just remember watching Ron Hornaday race my dad back in the Southwest Tour days. He was an animal then and an unbelievable race car driver. To say I’m in the history books with Ron Hornaday — and all those great race car drivers – it’s great being in the NASCAR Camping World Truck Series. I still say it’s the best racing in NASCAR.”

It is just 96 days and a wake up til the Camping World Truck Series takes the green flag at Daytona in 2015!

I will see you there!