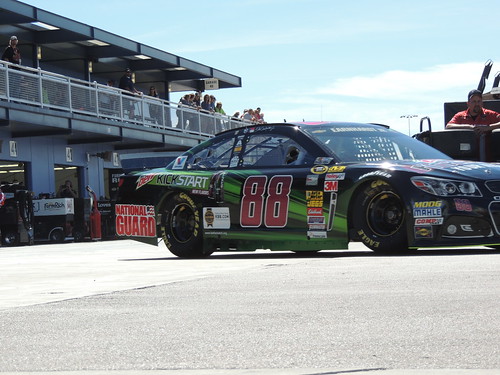 It has been said for several years that “when Dale Earnhardt, Jr. does well, NASCAR also does well!

On Sunday at Pocono Raceway Dale Earnhardt, Jr. won his third race of the 2015 season. This is the kind of season that many had predicted Dale Jr. would have beginning in 2008, when he joined Hendrick Motorsports.  This victory gave him ten top 10 finishes in 21 starts in 2014, and it has moved him ever closer to his teammate, Jeff Gordon in the point standings!

This victory, the GoBowling.com 400, gave Earnhardt,Jr. the Pocono sweep in 2014! His three victories ties him with teammate Jimmie Johnson and Team Penske’s “Blazingly Bad” Brad Keselowski for the most wins in Cup this season.

His three wins in the season are the most since he won six in 2004, while driving the #8 Budweiser Chevy with the team his father founded – Dale Earnhardt Inc.

After getting out of his car on Sunday, Earnhardt whipped out his cell phone and made a heartfelt phone call to the man who hired him seven years ago, Rick Hendrick.

“That was Rick (Hendrick),” Earnhardt said. “I just thanked him for how he has changed my life and how he has supported me and this whole team and how lucky we are to have the power that we have, the cars that we have. It’s all because of Rick. He just puts great people in the right places and he has a knack for what he is doing. I wanted to thank him and make sure he understood how much I appreciated him even in this time where you kind of forget to thank everybody or you are just happy you won I wanted him to know how much it meant to me that I got the chance to drive this car and we got a win today.”

Now that Dale Earnhardt, Jr. is having “the break out season” that JUNIOR NATION has been waiting seven years for, could “World Peace” be not that far behind?