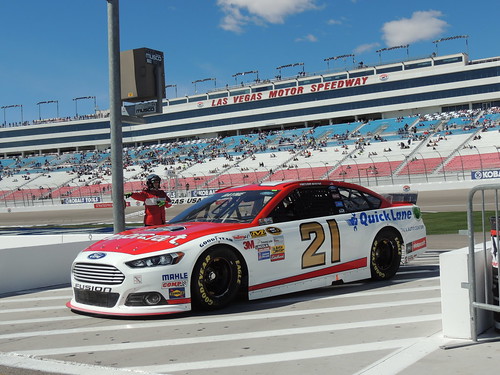 It looks like Ryan Blaney, son of Dave Blaney, will be the new driver in 2015 for the famed Wood Brothers Racing, or at least that is the rumors floating around the garage after Sunday’s Sprint cup race at Pocono.

Blaney, 20, will run a limited Sprint Cup schedule in the venerable #21 Ford along with Nationwide Series races for Team Penske as part of a technical alliance between Penske and the Wood Brothers. An announcement is expected next week at the race at Michigan International Speedway on Aug. 17.

Blaney currently leads the Camping World Truck Series points driving the No. 29 Ford for Brad Keselowski Racing. In just his second full season on the tour, Blaney has two wins – the first coming in just his third career start. Blaney has a stellar average finish of 7.6.

The third-generation racer has also shown tremendous progress on the Nationwide Series tour with Penske Racing. At 19, he won his first NNS race in his 13th career start last September at Kentucky Speedway. Blaney led 96 of 200 laps. In just seven starts in 2014, Blaney has posted six top 10s and three top-five finishes. His average qualifying position is 5.9.

For the last four seasons Trevor Bayne has competed with the Wood Brothers, in their partial Sprint Cup schedule. In his second start with the team, Bayne won the 2011 Daytona 500. However, Roush Fenway Racing announced in May that Bayne, 23, would be moving from the NNS to revive the flagship of RFR, the #6 Ford, in Sprint Cup  2015. Bayne’s best finish in the #21 this season was 19th twice – at Texas and Michigan.(motorsports.com)

So it appears that Ryan Blaney will be part of the future of Team Penske’s NASCAR endeavors.  By putting Blaney into a part-time Sprint Cup venture as good as the Wood Bros. ride, Team Penske can evaluate and give the necessary experience, and seasoning to enhance Blaney’s already talented resume, much the same way that Roush-Fenway Racing did with Trevor Bayne!