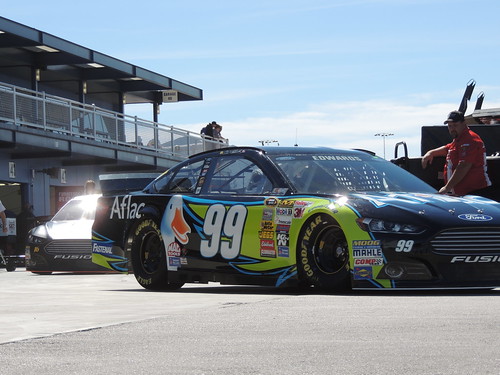 Ater months of rumors, Roush Fenway Racing confirmed Sunday at Indianapolis Motor Speedway that Carl Edwards will not return to the team as they announced the 2015 driver lineup.

“I have had the privilege of fielding entries for the world’s best race car drivers in NASCAR for nearly 30 years, and feel quite fortunate to have an opportunity to do that again next year,” said team co-owner Jack Roush. “We have always prided ourselves in developing talent at Roush Fenway, and our 2015 line-up is a testament to the success of our organization in that respect. Greg Biffle is one of the most purely talented racers I’ve ever seen behind the wheel of a car, and his experience combined with the raw natural abilities, enthusiasm and desire in both Ricky Stenhouse, Jr. and Trevor Bayne have me very excited for the future. Although we still have a lot to accomplish this year, both John Henry and I are looking forward to going to the track in 2015 with this blend of veteran leadership and youthful potential.”

“Fastenal is a first class partner and we are extremely pleased to have them team with Ricky Stenhouse Jr. and the #17 team starting next year,” Roush said. “Ricky has accomplished a great deal in a short time, and continues to improve each week.  We have very high expectations for his success in the future and I’m thrilled that Fastenal will be a part of that.”

Sunday’s announcement put an end to months of rumors about the future of Edwards, something both he and the RFR organization had been quiet on throughout it all. With the announcement, Roush thanked his former driver for their time together and said they are still focused on winning this year’s title.

“I will always be thankful for Carl’s contribution and the role he played in many Roush Fenway wins and championships,” said Roush. “We wish him well for the future. In the meantime, we are excited about continuing our quest for a championship with Carl and the No. 99 team in 2014.”(foxsports)

So with this announcement from RFR announcing it’s 2015 driver lineup, that puts to bed one half of the question on Carl Edwards future!  Now the question of where Edwards will land for 2015 should be answered in the coming days.  It has long been speculated that Edwards will be going to a new fourth team at Joe Gibbs Racing!

Now that RFR has led the way with the announcement of their 2015 driver lineup,  that now frees up Edwards and JGR to announce that JGR will be starting a fourth team with Carl Edwards for 2015!