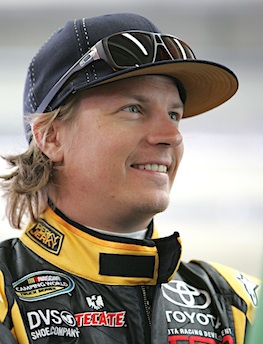 One week after Kimi Raikkonen made his NASCAR debut in the Camping World Truck Series, the former Formula One champion set his sights on the Nationwide Series, however, this weekend’s Top Gear 300 could be the Finland native’s last NASCAR event due to non-payment to Kyle Busch Motorsports.

Busch, who originally said Raikkonen would run three to five races with his organization, told the media Thursday the contract stated “we’re supposed to receive so much and we have not”.

“We’ve only received enough for these two races,” Busch said. “It’s either up to Kimi (Raikkonen) or up to the financial people that run Kimi’s business side of things and decide that they need to find the sponsorship funds in order to carry the experience for him further.”

For this weekend, the Nationwide effort for Raikonen is a joint project between Kyle Busch Motorsports and NEMCO Motorsports, which is owned by Joe Nemechek and his wife, Andrea.  For the Top Gear 300 the listed owner of the race car is Andrea Nemechek, the crew chief is Rick Ren, the general manager of  KBM.

“He’s (Ren) bit the bullet an awful lot in these past few weeks in putting this deal together,” Busch said. “We’ve done this before for some of our various technical alliances that we have such as VAR [Vision Aviation Racing]. We build turn-key trucks. All they have to do is put a motor, transmission and driveshaft in it and go to the race track. Kyle Busch Motorsports chassis has the availability to do that. We don’t like to, but we can. Certainly, we feel like we built a top quality piece and we’ll see how it runs here this afternoon in the Nationwide Series for our first outing in building a car for NEMCO Motorsports.”

In reviewing Raikkonen’s performance in the truck series, Busch said the world driving champion “did a nice job.”

“Certainly, he gave the truck a good ride,” Busch continued. “It was really loose and he did a nice job with car control and everything else. What’s to be expected of him this weekend is certainly to just again try to run all the laps, try to make 300 miles in a Nationwide Series race, get a feel for what the car is like.”

Raikkonen said he learned “quite a bit” in last weekend’s truck race.

It is the same Foster Gillette that raised the statement from Ray Evernham that questioned why Kimi Raikkonen would partner up with a group of men, Foster and George Gillette, who have a very difficult time paying their bills!  It appears the the Gillettes still operate in the same fashion!  The Gillettes have had financial problems dating back to the 80’s with their bankruptcy involving their ownership in ski resorts, in particular Vail, their ownership in the Toronto hockey team, and last year’s financial fiasco with the Liverpool soccer team.

So there is some history for why Kyle Busch is not willing to keep funding Kimi Raikoneon’s NASCAR racing venture without seeing the promised money on the part of Foster Gillette and Kimi Raikkenon!

For Kyle and KBM, it is “show me the money”!

For Kimi Raikkonen, it might be time to sever his relationship with the Gillettes and form a more trusted racing alliance that can pay its bills on time!