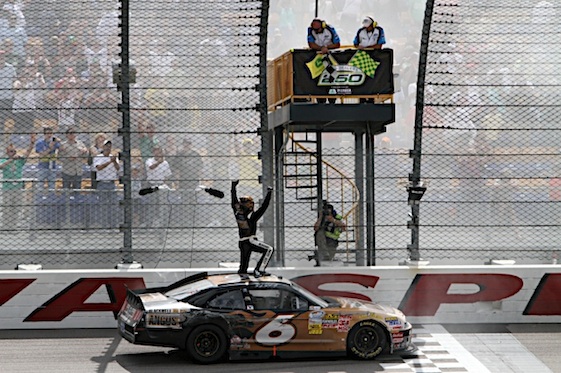 The John Deere Dealers 250 Nationwide race at Newton, Iowa was a Roush-Fenway Racing 1-2 finish.  However, it was not the traditionally favored Rouch-Fenway driver, Carl Edwards, who won the race Sunday.  It was second year driver, Ricky Stenhouse, Jr., who garnered the victory at the Iowa Speedway.  It was Stenhouse’s first victory in the elite touring races of NASCAR in just 51 starts.

This, and the few other, stand alone event always gives an opportunity for the Nationwide regulars to showcase their racing talents without most of the “double duty Sprint Cup drivers” over-shadowing them.  So that is just what Stenhouse did Sunday afternoon.  Stenhouse held off his RFR teammate, Carl Edwards, to break out and become a first-time winner on the Nationwide circuit.

Rick Stenhouse has come a far piece since this time last year.  His initial foray into the Nationwide was not too pretty.  Last season Stenhouse seemed to hit everything except the pace car!  It seemed like every race his RFR #6 Blackwell Angus Ford was being put back in the hauler as a crumpled pile of sheet metal.  So much, in fact, that Jack Roush took him out of the car for a few races to try to let Stenhouse try to regroup.

Regroup he did!  Once Stenhouse got back into his ride, he steadily improved his racing skills and finishes.  Currently, Stenhouse is in third place in the Nationwide standings, just 8 points behind the leader.   If he continues to have excellent finishes, the reward just might be elevating him into the UPS #6 RFR Ford in the Sprint Cup series, replacing the under-performing David Ragan, who’s contract expires at the end of the 2011 season!

What is your thoughts on Ricky Stenhouse, Jr’s future with Roush-Fenway Racing?

Here is  the unofficial results of the John Deere Dealers 250 at the Iowa Speedway.