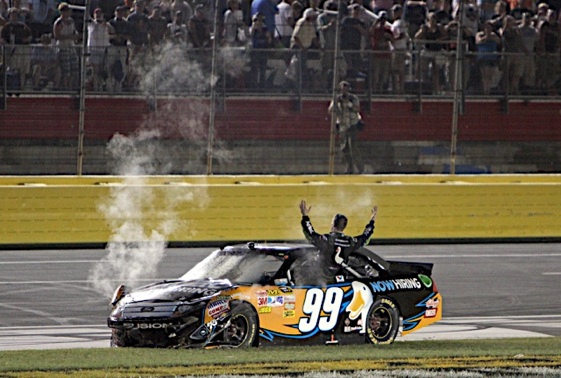 Saturday night the good, the bad, and the ugly happened all in one lap for Carl Edwards.  Saturday night he won the NASCAR All-Star race collecting a cool million dollars, then he tried “the Kenseth sling the race car through the grass doughnut”, only to demolish the front clip of his race car!

Edwards planned to celebrate with a slide through the frontstretch’s grassy apron, followed by a skidding halt at the start-finish line. Next was to be his traditional celebratory back flip, a brief trip into the stands and then a short drive to victory lane. Surprise!

However, Edwards didn’t expect his car’s front splitter to dig into the frontstretch’s grassy apron just before the quarter-mile track, nearly flipping his car as its front end was ripped away. Edwards was shocked that suddenly his powerful race car was now a hunk of junk, but the 31-year-old Missouri native didn’t let the miscue stifle the rest of his celebration.

While the song “Flipper” blared over the track’s public address system, Edwards charged into the grandstand, celebrated briefly with the fans, then joined his team in victory lane where a wrecker towed his car.

“He’s the only back-flipper in the field,” Roush said in explaining why he assigned rock star status to his driver. “He’s the first one to crawl up into the stands. Some of the drivers wouldn’t go up in the stands like that after a race and for good reason. But Carl, he’s well thought of and he’s out there doing things that other people wish they thought of first, and he drives the hell out of our race cars. He was the cornerstone of our organization today. He’s a draw for sponsors and a rallying point for his team.”

Edwards’ performance this year has made him the 2011 season’s top free agent. Neither Roush nor Edwards will discuss contract negotiations, saying their focus is on obtaining the series championship, that it’s a private business matter. However, one can be assured that Ford Motor Co. doesn’t want to let Edwards slip through its fingers like it did Jeff Gordon in the early 1990s.

It was well after midnight when Edwards, crew chief Bob Osborne and Roush completed their media obligations following their All-Star victory. A situation that left Edwards pointing to a Cessna Citation as making his racing ventures possible.

As they walked out of the media center, Osborne wasn’t concerned about the wrecked car, saying he had a better one at the shop for next weekend’s Coca-Cola 600. Roush wasn’t worried about NASCAR changing the rules because of his teams current domination on the intermediate tracks due to all of the cars similarity in aero mapping and engine parameters. And Edwards, well, he simply wanted to find retired CMS president H.A. “Humpy” Wheeler to collect the other half of a torn $100 bill Wheeler told him he would give him when he won the All-Star race.

So Carl, are you going to pay for the repairs to your race car with your new found wealth?