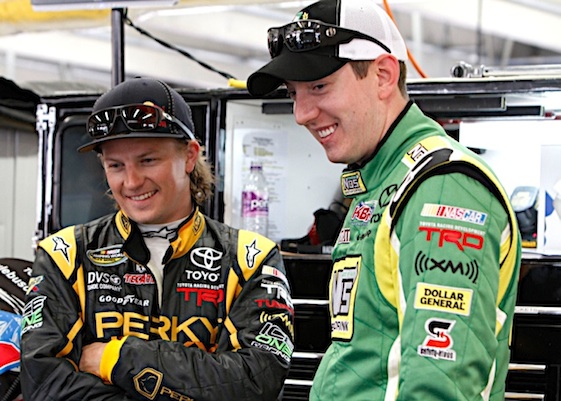 The pieces to the Kimi Raikkonen Nationwide Series puzzle are coming together. FOXSports.com has learned that the car is being assembled by Kyle Busch Motorsports but the owner points will come from Joe Nemechek’s #87 entry, registered under NEMCO Motorsports, which is currently 19th in the NASCAR Nationwide Series points standings.

The crew will come from NEMCO with additional support from KBM employees. NEMCO will provide transporter, equipment and back up car for the race. Raikkonen finished 15th in his NASCAR Camping World Truck debut. The 2007 Formula One champion was approved to compete in next Saturday’s Nationwide Series race prior to Friday night’s event.

There have been quite a few of those open wheel invaders try their hand at racing “dump trucks”, however, only a very select few have made the grade in NASCAR.  Can Raikkonen be counted in with the select few?

What are your thoughts on the former Formula 1 Champ’s jump into NASCAR?