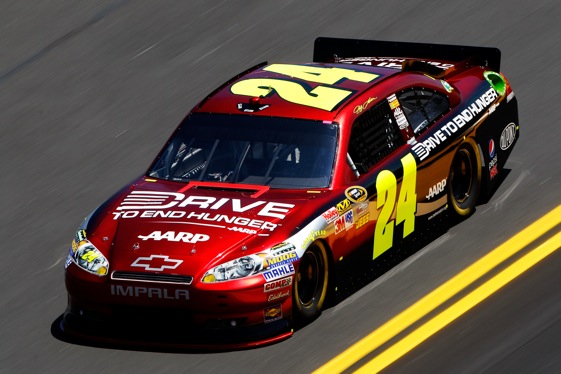 It took Jeff Gordon 67 races to find his way back to victory lane.  That’s right, his last victory was at the Texas Motor Speedway back in April 2009!  This victory was  Gordon’s 83rd career win in the Sprint Cup series.

The win came in just the second race with Alan Gustafson as the crew chief.   You may recall the major shakeup in the off season at Hendrick Motorsports, it is apparently working for the four time Sprint Cup champion.

“I don’t care how we do it, we just want to get to Victory Lane,” Gordon said. “But to do it that way, and to see the fans reaction? I mean, we beat Kyle Busch. We were the only one to beat Kyle Busch this weekend. He’s so tough to beat.”

Gordon led most of the second half of the race. But with 30 laps to go, green-flag pit stops started. Gordon had a slow stop and came out third behind Tony Stewart, who took just two tires, and Busch.

Busch blew past Stewart in less than a lap and got out to a healthy lead. But Gordon started cutting away at the margin and with eight to go, was on the bumper of Busch’s Joe Gibbs Racing Toyota.

Gordon went low in his Chevrolet when Busch wiggled up toward the wall out of a turn. The two went door-to-door inches apart. Gordon finally cleared Busch and then ran away to a 1.1 second victory.

“I thought if I catch him, what am I going to do with him?” Gordon said. “We caught him, he got loose, I got underneath him. I didn’t know what to expect.”

Nobody will ever know if the fastest car in the starting field won this race.  The first third of the race was marred by wrecks which took out a number of cars which had either led laps or appeared capable of leading laps.

The big wreck, 13 cars were involved, occurred on the restart after a medium wreck which happened on lap 60.

In the first wreck, polesitter Carl Edwards was forced into the grass when Kyle Busch ran him off the track. Among others involved was Harvick.

In the first wreck, polesitter Carl Edwards forced into the grass when Kyle Busch ran him off the track. Among others involved was Harvick.

““I’m not exactly sure what happened,” Edwards said. “I’ll have to talk to Kyle about it. I thought at first he was just frustrated and he turned left to get back in line and he didn’t know I was there, but I watched the tape and I think he really did get loose. He hit me hard and I was left with nothing. I got rammed to the infield.

“If I would have turned right, I don’t think I could have made the corner to clear that curb, so that’s just the way it is. That is the fastest car at the race track. It’s just a shame it’s on jack stands. We’ll get it put back together, though, and we’ll get all the points we can. We can win this championship. I’ve never had a run like this where our cars are this fast.”

Within moments of the race going back to green, the 13-car pileup occurred. This was started when Matt Kenseth moved up into Brian Vickers. The impact popped Vickers tire, Vickers got out of shape and the track turned into a junkyard.

Nevertheless, this Sunday was Jeff Gordon’s day to shine and put to rest that rumor that maybe Jeff Gordon had lost that fire in his belly!  Today he led the most laps, had a very strong race car, but most importantly, Jeff Gordon went to victory lane!

Here is the unoffical results of the Subway Fresh Fit 500 from Phoenix International Raceway.