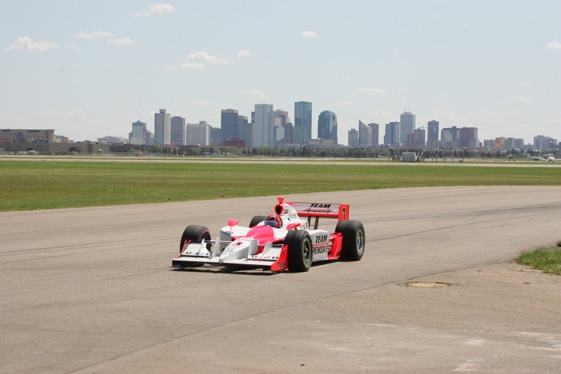 Randy Barnard, IndyCar Series CEO, announced that the open wheel series will return to the Las Vegas Motor Speedway on October 16th to stage it’s finale of the 2011 race season.

The IndyCar Series last competed at LVMS, part of O. Bruton Smith’s Speedway Motorsports Inc. empire, in 2000 in a race won by Al Unser Jr.  Five series events were run at LVMS from 1996-2000.

“I said at the INDYCAR State of the Sport in mid-January that we must give our fans a great experience with three primary elements – great entertainment, competition and value,” Randy Bernard, CEO of INDYCAR, said Tuesday. “There is not a city in the world that can provide entertainment like Las Vegas. Las Vegas Motor Speedway will provide some of the fastest and most exciting racing fans will see anywhere, and the ticket promotion is true value. This is a time when INDYCAR can tell our fans that we thank them for their support.”

Heading to Vegas also works well for the the series’ title sponsor and that company’s customer base.

“In 2010, our first year as the title sponsor, the IZOD brand, together with the league worked aggressively to build awareness and excitement around the series, especially within the major markets, looking for ways to connect with new fans through a host of events and promotions that connected with pop culture,” said Mike Kelly, executive vice president of marketing for the Phillips-Van Heusen corporation, owners of the IZOD brand. “We can’t think of a better place than Las Vegas –  one of the greatest entertainment cities in the world – to take these initiatives to new levels and celebrate the 2011 World Championship.”

Bernard also announced the $5 million challenge to any professional race car driver not competing in the IZOD IndyCar Series for the season finale race, reinforcing the series’ positioning of its drivers as the best of the best.

“We showcase our drivers as being the very best, fastest and most versatile in the world,” he said, “and we are putting our money where our mouth is. If any race car driver in the world outside of the IZOD IndyCar Series can win the Vegas race, we will give you $5 million. We will accept five entries for this challenge, with entrants being determined by mid-summer.”

The IZOD IndyCar Series competed at Las Vegas Motor Speedway oval from 1996 to 2000, and Champ Car competed at the facility in 2004 and ‘05. Drivers who have visited Victory Lane at the facility include Unser Jr., Sam Schmidt, Arie Luyendyk and Sebastien Bourdais. The racetrack was reconfigured in 2006.

“We had the opportunity to conduct a test with Target Chip Ganassi Racing and Team Penske at Vegas last November and our cars performed very well at this facility,” said Brian Barnhart, president of competition and operations for INDYCAR. “Its banking and width is similar to Chicagoland Speedway, which has produced some of the most exciting, side-by-side racing and closest finishes in the history of the series.”

The schedule has been in flux this off season, with the street race at Edmonton, Alberta, Canada, initially dropped in November and then returned to its traditional July date. INDYCAR officials also recently announced that the series plans to make its last trip to the 1.5-mile Twin Ring Motegi in Japan – site of Danica Patrick’s lone victory in April 2008 – in September.

What is your thoughts on the Indy Car Series returning to Las Vegas for their series finale?