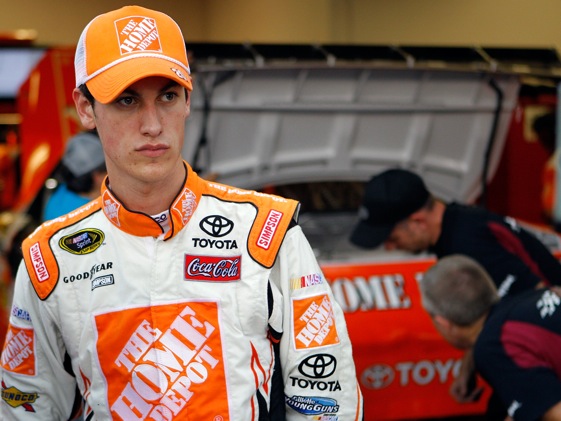 The 2010 Sprint Cup season was far from the ho-hum boring races that some seasons of yore produced.  The drivers were “having at it” both on and off the race track.

Here is a list of the 2010 top five moments according to WOMR.

The 2010 Daytona 500 will always be remembered as the race that was plagues by the big pothole in turns 1 & 2.  But that race proved that Jamie McMurray was going to be a contender in the 2010 season.  It also showed that the McMurray-Roush-Fenway Racing relationship was a total misfit.

McMurray will be a Chase contender heading into 2011, but he’s going to have to be much more consistent if that’s to happen. With the wins at Daytona, Indianapolis and Charlotte and the close call at Talladega, 2010 may end up going down as a career year for McMurray. And if it does, that’s sure as hell not a bad career.

That Gateway crash was the conclusion to what might have been the most-hyped NASCAR rivalry of the 2000’s. Edwards’ two consecutive uppercuts put him in a light that many never could have envisioned would ever shine on him, and it was Keselowski that ended up being the sympathetic figure. But as we head to 2011, the rivalry has simmered, with Kyle Busch taking up the fight on behalf of Edwards.

Even though it was not a Sprint Cup race, it was nonetheless heart wrenching to see him win at Daytona in the #3 Wrangler Chevy!

The obsession with Earnhardt Sr. may be setting the sport back with the main demographic that it’s losing, but that Friday night was one, maybe final, very necessary dose of nostalgia.

Earnhardt Jr. got a win, and was able to successfully and willingly walk in his father’s footsteps for an evening. The sport will be undoubtedly automatically healthier if Earnhardt Jr. can get a win in the Sprint Cup Series in 2011.

Busch was mad at Jimmie Johnson for what happened between the two at Pocono (Johnson got into the back bumper of Busch on the Long Pond Straight) and had already expressed his desire to knock Johnson off his pedestal after the two bumped fenders at New Hampshire.  But instead of strictly going after Johnson, Busch went after the whole Hendrick organization. He didn’t even spare 2012 addition Kasey Kahne.

“Well, I mean the guys at Hendrick are pretty boys and get People magazine covers and that’s their job,” Busch said. “My job is to go out and race cars and that’s what I focus on.”

And here’s the part where Kahne comes in:

“(Busch’s car owner Roger Penske) really helped me mature as a driver on and off the track, and, you know, if I even thought that I had a shot of jumping in that 5 car, a pretty boy named Kasey Kahne got picked over me, so that could answer your question as well.”

If you forgot, Busch’s contract extension and Kahne’s Hendrick announcement came nine days apart. Do with that what you will.

As the season progressed, it became apparent that there was no love lost between Kevin Harvick and Joey Logano.  That was extremely obvious after the spring race in Bristol.  But it really came to a head in the final laps at Pocono, when Harvick got into Logano into turn #3.

Harvick said Logano wasn’t giving him enough room. Logano said that Harvick dumped him. Who cares about that.

This is the money quote:

If you don’t think that’s the quote of the year in the Cup Series, then you’re insane!