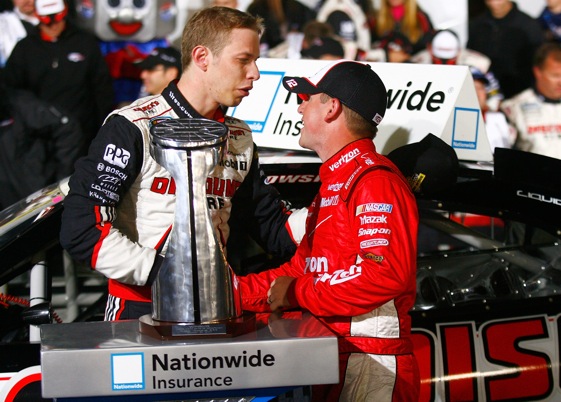 “We had some pit strategy there in the middle of the race which I thought was really going to pay off,” Keselowski said. “It didn’t quite work out perfectly. I felt pretty good.

“And then our last adjustment was just incredible and it really got our car going. Then it was just down to having perfect restarts there at the end. I don’t know if they were perfect, but they were sure exciting. Martin Truex Jr. ran a heck of a race. Without the pushes at the restarts by both my teammate Justin and Joey Logano, I couldn’t have won the race. I got by with a little help from my friends I guess you can say.”

“It’s just frustrating,” Edwards said. “We’re a better team than that. To finish13th, we’re better than that, so we just have to figure out what we were missing and work on it. We’ve got a good bunch of guys at the shop, so we’ll get it. We just were not that fast. There at the beginning we got set back by me stalling it out of the pits, but we made all of that back up. We should have been able to run better than 13th for sure.”

“I have never been so disappointed to run second,” Truex, said. “It looked like if those last couple cautions hadn’t come out, we were going to be in good shape. Just a little too tight after that last run there. It’s a shame because on the green flag runs we were really fast and really just called off the adjustments and then we got too tight later. These guys did a great job – they’re a part time Camping World East team that won the championship so to run like this with them again for the second time is awesome and they do an awesome job. I can’t thank them enough. Just wish we could have done one stop better.”

Here is the unofficial results from the Dollar General 300 Friday night at the Charlotte Motor Speedway.

As a distant side note, Danica Patrick and her #7 GoDaddy.com money and car finished 21st!