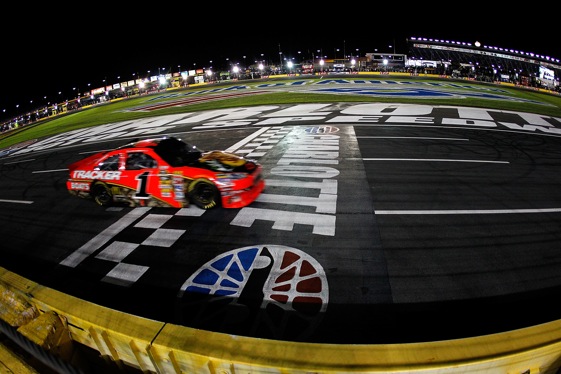 Jamie McMurray grabbed the lead away from Kyle Busch with 21 laps to go, and held on to it to secure the victory at the Charlotte Motor Speedway Saturday night.  By winning the Bank of America 500, McMurray sealed the fate of approximately half of the twelve drivers in the Chase for the Sprint Cup.

Even though McMurray failed to make the coveted Chase, his team was able to win the Daytona 500, the Brickyard 400, the two biggest races of the year, and now the Bank of America 500 Saturday night at Charlotte Motor Speedway.  The Bank of America 500 was McMurray’s sixth career win the Sprint Cup series.

“I don’t know that I’ve paid a lot of attention to the restarts, but restarts have all been really good for me,” McMurray said. “And I don’t know why, but I feel like I do a really good job when the tires spin, of not spinning my tires. And it’s very hard to discipline yourself when you have 900 horsepower to not continue to push the throttle down till they spin. When they start spinning, you lose a tremendous amount of speed, and it’s very hard when you know victory lane is the difference of spinning the tires and not.

“And as soon as I heard “Clear,” it’s amazing when his front bumper brakes the plane of your rear bumper, how you feel the car lurch forward, because there’s so much drag when they are side drafting you. As soon as I heard the spotter say “clear” and I felt that, that’s a pretty good feeling, I promise you.”

It appears that with the running of the Bank of America 500, the Chase for the Cup has been whittled down to three drivers, Jimmie Johnson, Denny Hamlin, and Kevin Harvick.  For any of the other nine contenders/pretenders, it would take a combination of a “world class recovery”, and some extremely bad luck on the parts of Johnson, Hamlin, and Harvick in the remaining five races of the season to get those teams back into “the hunt”!

This is the unofficial results of the Bank of America 500.

Here is the unofficial standings in the Chase for the Cup after the running of the Bank of America 500 Saturday night.

Twelve drivers, now five races, one championship, who will be the last man standing?