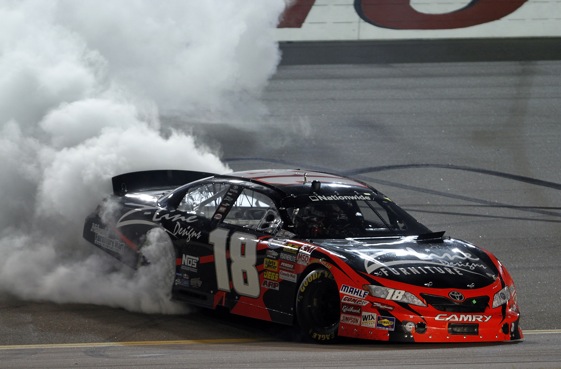 “There’s no question that Kyle Busch is currently the hottest thing on four wheels.

His recent Bristol Triple – three wins in three days in NASCAR’s three touring series – was an amazing feat, especially on a treacherous track like Bristol.

Kyle is a gifted young racer, tough, talented and temperamental.

But let’s not get carried away.

After Busch followed his Bristol sweep with a truck win at Chicagoland, someone tallied his career win total and compared it to Richard Petty’s record of 200. They suggested that Busch was racking up victories on a Petty-like pace.

Petty’s 200 victories all came in NASCAR’s top series. No second- and third-tier wins.

Busch has 17 wins this season but only three in the Cup Series.  Career-wise he has a total of 19 Cup victories.

Granted, 19 Cup wins is nothing to sneeze at, especially considering that they’ve come in less than six full seasons, and that Busch a mere lad of 25.

But its way too early to coronate Busch among the all-time greats. And to compare his win total in all three series to Petty’s record is preposterous.

If someone wants to count ALL racing victories, then Dick Trickle might be at the top of the heap. Trickle once estimated that he’d won approximately 1,200 races in all divisions. Busch’s numbers don’t look quiet so impressive when matched against Trickle’s.

WOMR strongly disagrees with the viewpoint of Larry Woody!

All 20 of Kyle Busch’s Camping World Truck victories have come from his affiliation with smaller race teams, Billy Ballew Racing and/or from his newly organized race Kyle Busch Motorsports.  Neither are associated with “The Big Four” race teams of the Sprint Cup series, that being Joe Gibbs Racing, Hendrick Motorsports, Rouch-Fenway Racing, or Richard Childress Racing.  So it is not a David vs Goliath in this series.

However in the Nationwide series, things are somewhat different.   In this series there are ties to “The Big Four” race teams in the Sprint Cup Level.  It is, after all, the training grounds, the AAA league of NASCAR racing, so you would expect some affiliations to exist.  But that still does not discount the fact that Kyle Busch has dominated that series in races which he has participated!

As a side note, when JGR has put another driver into their Nationwide #18 Z-Line Toyota, the results are not even closely resembling the results from Kyle Busch!  Other drivers have not won a single Nationwide race in that race car!  Need WOMR say anymore?

Need WOMR say anymore other than Kyle’s Sprint Cup wins speak for themselves?  He will extract everything out a race car that he can, in order to try to win the race!  you can not ask any more from a race car driver than that.  Needless to say, there is an element of intelligence that must also accompany that desire to win races, whick comes with experience!  “The Shrub” appears to have gained that knowledge finally!

Love him or loathe him, his racing skills ranks up with some of the greatest in the history of NASCAR!  Nevertheless, his personal traits, and the way he personifies himself on the race track, indicates that he has never progressed any further socially than maybe a 13 year old, at best!

To say that Kyle Busch is a very polarizing individual is a vast understatement!

Is the 2010 Sprint cup championship in his future?

These questions are worth pondering.  Your views are warmly welcomed!