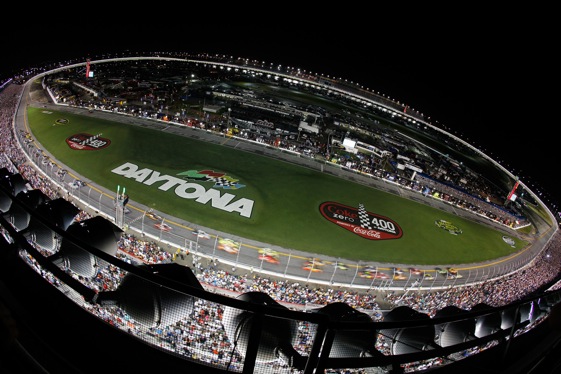 “The World Center of Racing”, that high banked racing facility known as the Daytona International Speedway, is getting a much needed facelift.  Starting Sunday morning the race cars have been replaced by bulldozers, road graders, cranes, and other heavy-duty work equipment.  The race track is is being dug up and resurfaced for the first time in 32 years!

“It’s an historic moment for this facility, and we’re excited to see the work on this project begin,” said Robin Braig, president of the Daytona Beach, Fla., track that is the epicenter of NASCAR’s empire.

DIS’ entire layout , featuring its signature turns banked at 31 degrees, will be repaved as well as the skid pads, apron and pit road. Concrete will be used for the pit stalls. All of the existing asphalt will be removed down to the original 52-year-old lime rock base, which will be leveled before repaving begins.

The repaving of DIS will remain true to NASCAR founder Bill France Sr.’s original vision, layout and geometry of a project that broke ground on Nov. 25, 1957 on land adjacent to the city’s airport. At the time, Big Bill’s plans were regarded as blueprints for a marvel of engineering and construction. On cue, DIS played host to a field of 59 cars for the inaugural Daytona 500 on Feb. 22, 1959.

Amazingly, the racing surface has not been repaved since August 1978, a project that took several months and was finished in time for the 1979 Daytona 500.

The track is 40-feet wide, with an apron ranging from 12- to 30-feet. The track’s frontstretch measures 3,800 feet, including a 1,900-foot “chute” section from Turn 4 to the middle of the trioval, which is banked at 18 degrees. DIS’ “Superstretch” backstretch measures 3,000 feet.

A $20 million repaving originally was scheduled for 2012 but moved up following a problem with a pothole that forced two lengthy red flag stoppages during the Sprint Cup Series’ season-opening Daytona 500 on Feb. 14.

See you at Daytona in February!