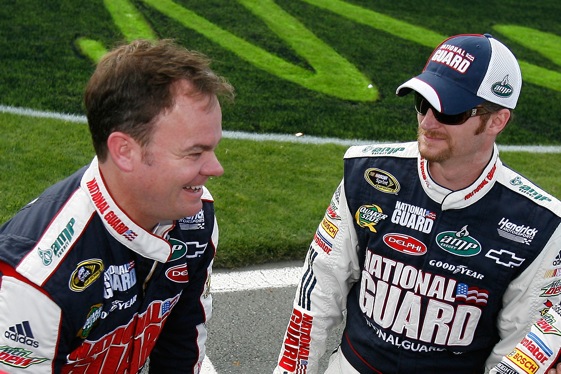 Could it be that Dale Earnhardt,Jr.’s rise in the standings this season is related to the fall of Mark Martin?

Earnhardt finished fourth last Saturday night at the Coke Zero 400 and climbed up to 12th position in the Chase.  Meanwhile Martin was caught up in one of the “big ones”, finished 28th and fell out of the Chase to 13th place.

Is this just racing luck or is there something to this analysis?  If you look at the bigger picture, maybe there is something here.  During the off season Rick Hendrick made some changes to try to bolster the sagging performance of “NASCAR’s rock star”, Dale Jr.  and the #88 race team. Hendrick moved some “key players” from Martin’s team over to Earnhardt, Jr.’s team.  It was explained as part of “reorganization “ effort to help both teams.

After last year’s performance, Mark Martin’s team really didn’t need any help, they had 5 victories to show for themselves.  What needed help?  Now 18 races into the season, Martin has zero victories and has fallen out of the Chase.

Does any or all of this Kahne, Martin, and HMS negotiations have an affect on the Martin’s 2010 performance?  One thing that is for sure, winning in NASCAR requires a multitude of factors to fit together snugly, from mechanical to mental, and many things in between.  There are some people that may wondering if Hendrick’s tinkering may have upset the apple cart.

Nevertheless, there is some happy news for the ardent Mark Martin fan.  Martin is only a handful points out of 12th place.  The driver currently in 12th place is  Carl Edward, hardly a powerhouse and winless in 2010.

What is your view on Martin’s slide and Junior’s ascent?