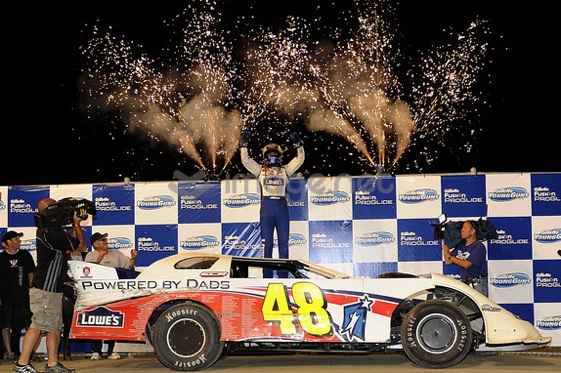 Eldora owner and event organizer Stewart elected to start in 27th starting spot, dead last, and navigated his way through the carnage to finish sixth. Each team had the option of sending a driver to the rear of the field and if that driver won from the back, that team’s charity would get an extra $50,000. “Smoke”, aka Tony Stewart, who was driving for Cincinnati Children’s Hospital, was the only driver that elected to go to the back of the pack.

Kasey “Homeless in 2011” Kahne was the class of the field in the first qualifying heat, but an engine problem in his #9 Budweiser car forced him to a backup for the Prelude. But since he didn’t prepare a backup, he was forced to use a car from Eric Jacobson that Jacobson was going to use in the Dream race on Saturday night. Kahne wheeled the backup car to an eighth-place finish with the motor hitting on eight cylinders and fenders still intact!

Oh, and that backup car’s number, co-incidentally it happened to be # 5. Talk about dirt imitating asphalt, hummmm.

One operational note of interest, Eldora’s restart cone was the victim of repeated abuse during the innumerable restarts in Wednesday’s feature race. The restart cone, a staple of many dirt tracks, is designed to keep the drivers in a single file line until they cross the start finish line. However, as has been the case in the Sprint Cup Series over the years, cones tend to get run over by even the best drivers!  On the last couple of restarts sans cone, it was a “hooligan” heading for the restart!

Ron Capps and David Reutimann, among others, ran over the restart cone enough that track officials decided near the end of the race that placing the cone out on the track before every restart wasn’t worth the effort anymore!  It was an exercise in futility, to say the least!

And now you know the rest of the story, WOMR looked it up so that you wouldn’t have to!