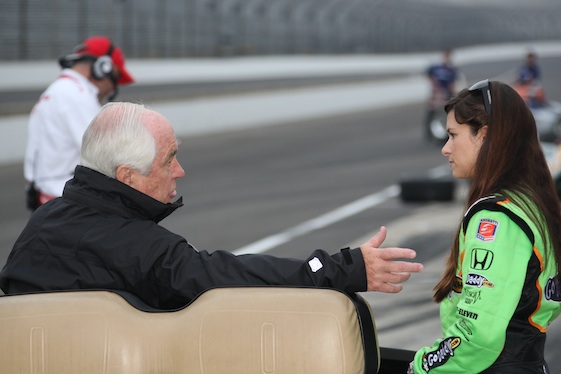 “The Captain”, Roger Penske has developed a strict set of guidelines for scouting and selecting race car drivers for his race teams.  A signature maneuver or victory schtick is definitely not included in his criteria.  But having said that, two of Penske’s drivers who are currently making the headlines have developed interesting post-race celebrations.  Helio Castroneves pioneered the “spiderman fence climb” at Indy, and Kurt Busch does his backwards parade lap, “the unwind”.

On Saturday Team Penske won the 2010 Indainapolis 500 pole for the 4th time with odds-on-favorite to win his coveted 4th Indy 500, Helio Castroneves.  Later that evening, Kurt Busch won a “cool million” for “The Captain” by winning the NASCAR All Star Race.  Those two feats put about $1.25 million dollars into the Penske organization for the weekend!

So the question begs to be asked; “What does it take to secure a ride with Team Penske?”  What traits do Helio “Spiderman” Castroneves, Ryan Briscoe, Will Power, Kurt Busch, Sam Hornish, Jr., and “Blazingly Bad” Brad Keselowski have in common?

“Well, I think, you know, there’s three criteria that always stuck out in my mind,” Penske, 73, said during his team’s traditional Fast Friday news conference at IMS. “The first criteria, has he been a winner in some kind of racing, so he knows how to win. There are a lot of people that have been fast but don’t know how to win. So that would be number one.

“Number two, in today’s racing the ability to communicate technically, not just because you have a big right foot, but technically can you communicate with your crew, do you understand, are you engaged on the technical side of things. I think that’s very important.

“Obviously the third thing is the commercial side of it, being able to support our sponsors and the media and other things. So those three things are key. As Helio said, they’ve got to have the fire in their belly; they’ve got to want to win. We have three people here, one’s going to, we hope, win the race.

“I think the fourth point would be you’ve got to have drivers who are not just one man on one team when you’ve got three drivers. We have one team with three drivers, and I think that’s super critical. That’s one of the things that (Penske president) Tim Cindric has been able to bring into the team to continue to say that’s the mission here is one team. And (team adviser) Rick Mears obviously is a byproduct of that over the years, so that’s kind of my formula.”

It must work because racing-wise, Penske has been competing in the United Sates since 1958, scoring victories in every series in which it has run. Team Penske is the most successful outfit in domestic open-wheel history, with 141 wins and 12 national championships. Team Penske is synonymous with the 2.5-mile Speedway, where its drivers have won a record 15 Indy 500s, and as of Saturday, a record 16 Indy 500 poles.

What is your take on Team Penske and Penske Racing’s successes?