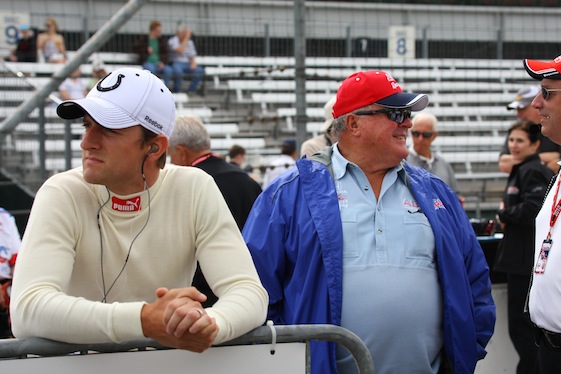 Being related by blood, you would think that A.J. Foyt IV would know better than to complain about cars built by his iconic and strong-willed grandfather, A.J. Foyt.  Nope, that was not the case Saturday.  And as a result, the grandson is out at Indianapolis Speedway today and Jaques Lazier is in.

A.J. Foyt Racing made the move after a Saturday Pole Day that did not go well for the team. With Foyt IV in the car, it did not generate enough speed to qualify.  Therefore, it must now run its way into the field on Sunday’s Bump Day.

After Saturday’s struggles, Foyt IV reportedly complained and was replaced by Lazier, a veteran at Indy who was at Indianapolis Motor Speedway looking for a ride.

“He wasn’t happy with the car,” Foyt said Sunday morning of his grandson. “If you’re not happy with your car here, you’re not going to do anybody any good.”

Asked if his grandson might be back in the car before the weekend is over, Foyt said probably not. Can’t make a change like that temporary, he said.

Lazier said he had been trying to put a deal together with Foyt’s team in the days leading up to the 500 but could not get it done.

Lazier said he got the call on Sunday morning. It came from four-time 500 winner Foyt and AJFR’s Larry Foyt.

Lazier could do no better than young Foyt, however, the car did not make the race.