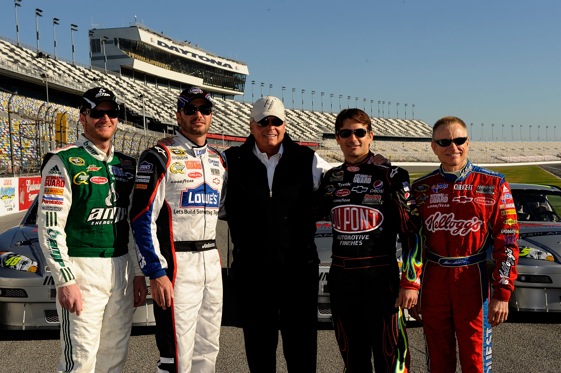 This newly announced deal between Kasey Kahne and Hendrick Motorsports is so full of holes that it looks like Swiss Cheese.  Most people who might have been involved in this kind of deal, with so many details left undone, that they would not get involved at all from the very beginning.  The contract seems to be knee jerk and half-baked at the very best!

In this day and age in which handshake deals are not worth the paper they are written on, in a time when leaps of faith in the business world are routinely rewarded with high speed plunges to the bottoms of rocky chasms, it is inconceivable that two parties would enter into this kind of multi-million-dollar, career-determining deal.  But again this is Hendrick Motorsports making this deal.

There are so many strings dangling that anyone in their right mind would not get involved in this particular situation.  But this deal is a done deal for one specific reason, it is Rick Hendrick making the deal!

Kahne summed this deal of a lifetime up in in just seven succinct words.  “You dream of driving for Mr. Hendrick,” Kahne said.  There is a powerful allure to drive for the man who has two four-time champions in his employ, and is affectionately know as just Mr. H.  The mystique is so powerful that Kahne was willing to put his career in limbo just for the opportunity to drive for Rick Hendrick.

Since Mark Martin is under contract with HMS to drive the #5 GoDaddy.com Chevy through the end of the 2011 race season, where does that leave Kahne?  He will be in the hands of Rick Hendrick Employment Services, and Mr. H has said that he, himself, is responsible for placing Kahne into a race team for 2011.  Hendrick states further that there are “tons” of options.

So the guessing game starts as to where Kasey Kahne will land just for the 2011 Sprint Cup season.  At Workingonmyredneck the view is that Stewart-Haas Racing has the inside edge for landing Kahne.  But there are, at least, a couple more options that Hendrick has to explore.

But one thing is for sure, with the announcement of this deal there are at least a dozen drivers that are both angry and jealous.

There is now one less good job available!