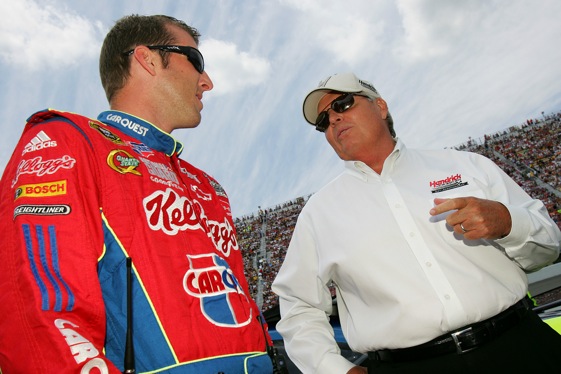 The following press release was published by Hendrick Motorsports on Wednesday regarding Kasey Kahne driving for HMS in 2012:

Beginning with the 2012 NASCAR Sprint Cup Series season, Kasey Kahne will drive the No. 5 Chevrolets of Hendrick Motorsports after signing a long-term contract with the organization.

Mark Martin, 51, the current driver of Hendrick Motorsports’ No. 5 team, will complete the 2010 and 2011 seasons. When Kahne takes over in 2012, he will join teammates Jeff Gordon, Jimmie Johnson and Dale Earnhardt Jr. in Hendrick’s four-car stable.

“In Kasey, we saw an opportunity to cement a big piece of our future,” said Rick Hendrick, owner of Hendrick Motorsports. “He possesses incredible talent and a tremendous dedication to his craft, and we know he’ll be a great fit within our company.

“Kasey has earned the respect of his future teammates by the way he’s handled himself on and off the racetrack, and we know he’ll be a contributor to the success of Hendrick Motorsports for many years to come. To have someone of his caliber join our team is an unbelievable opportunity for us.”

Kahne, who turned 30 on April 10, is an 11-time Sprint Cup race winner. Now in the midst of his seventh full-time season at NASCAR’s elite level, the Enumclaw, Wash., native also has earned 16 pole positions, 43 top-five finishes and 79 top-10s on the tour.

“I have a comfort level with Mr. Hendrick, my future teammates and the culture of the organization,” said Kahne, whose contract with Hendrick Motorsports will run through the 2015 Sprint Cup season. “For me, it’s the right fit on every level, and I think it gives me a great chance to win races and compete for championships.

“Determining the next step in my career has been an important process, and I’m excited and relieved to have the decision made and announced. Now it’s my responsibility to put all of my energy into winning races and having a successful 2010 with my current team and our sponsors.”

Although 2012 and beyond has been solidified, Kahne is not scheduled to drive a Hendrick Motorsports entry in 2011 due to NASCAR’s four-car limit. While who he will race for has not yet been determined, Kahne intends to drive a full Sprint Cup Series schedule next season.

“If this opportunity was going to happen, I knew having some unanswered questions would be part of the scenario at this stage,” Kahne acknowledged. “Hendrick Motorsports has a commitment to Mark Martin that they want to fulfill, and that’s important. It’s part of what attracts me to the team.”

What is left unsaid is where Kasey Kahne will land for the 2011 NASCAR Sprint Cup season.  There is peculation that, because of the close relationship that Stewart-Haas Racing has with Hendrick Motorsports, Kahne could land at SHR for the 2011 season.  SHR  has only two race teams in the Sprint Cup series so there is room to expand to three race teams and still comply with the 4 race team maximum mandated by NASCAR.

Additionally, Furniture Row and Phoenix Racing are closely aligned with Hendrick Motorsports for engines and chassis alike.  So these race teams are options for Hendrick and Kahne  to consider as well.  Hendrick says that he wants finalize where Kahne will be racing in the next 90 days.

Where do you think that Kasey Kahne will land for the 2011 race season?

One Comment on “Hendrick Motorsports Talks About Signing Kahne”