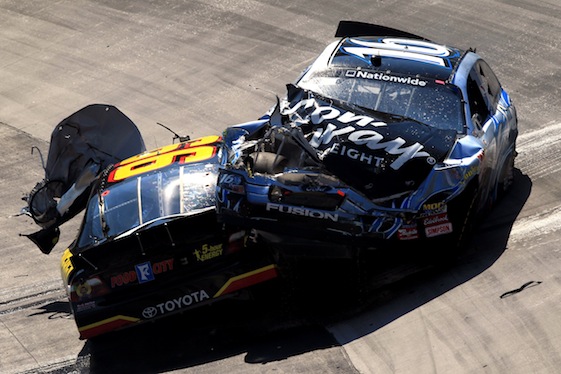 “Couldn’t be happier to be here, unbelievable”, said Allgaier.  ” I just hope that this is the first of many.”

“Blazingly Bad” Brad Keselowski, the pole sitter, finished second to his team mate.  Finishing third through fifth was Kyle Busch, Carl Edwards, and Kevin Harvick.  Harvick had to use “the chrome bumper” on Joey Logano in the last lap of the race, dropping Logano to 14th place.  Consequently, after the race ended it appeared that Logano was hunting for Harvick in the garage area before he (Logano) was led away!

Earlier in the race, on lap 91 there was an ugly wreck when Scott Wimmer and Brian Scott got together which resulted in a spin by Colin Braun.  Braun’s car was then rammed in the rear by Steve Wallace.  The impact launched Braun’s car into the air coming to rest on top of Wallace’s car and causing Wallace’s car to erupt in flames.  Neither driver was injured from this accident.

Stay tuned for Sunday’s beating, banging, bruising, and brawling Sprint Cup race.  Remember that Bristol Motor Speedway is so tough that it has its own zip code..…..911! Add to the fact that the drivers, owners, and crew members are reminded to check their feelings and emotions at the pit gate prior to entering the facilities!  Having said all that, Sunday’s race should illicit the traditional sparks, fumes,and smoke from the racing surface, as well as, from the driver’s helmets!

Y’all be careful now, ya hear!