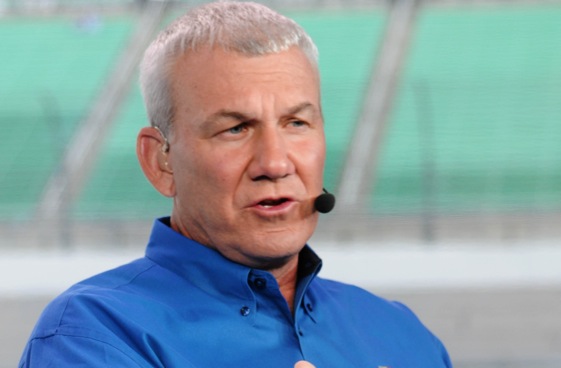 As the racers head into to Bristol, NASCAR’s most challenging and crash-filled track, the media must walk a very tight rope.  That tight rope is the difference between being an race car analyst and a circus barker!

That’s the opinion of Dale Jarrett, who will be calling the Saturday’s Nationwide event for ESPN, even as all eyes will be focused on Sunday’s event with “Cousin” Carl Edwards and “Blazingly Bad” Brad Keselowski.  “It is a big story that can’t be ignored,” says Jarrett.

We have to do our jobs, describe what’s going on, and call things as we see them. As an analyst I sometimes have to be a little critical, even if the drivers are friends of mine.”

While some complain that the media goes out of its way to over-hype and stir controversy, Jarrett said the Edwards-Keselowski feud is “is something that has to be covered. It’s a story that’s out there.”

Besides, he added, there’s nothing wrong with drivers showing some emotion, and the media reporting on it.

“The passion and emotion of our sport is what makes it so popular,” he said. “I don’t think we want to take that away. If it gets out of control, NASCAR can step in. But I find it a little odd that for awhile we heard complaints about a lack of action in racing, and now we hear complaints because there’s TOO MUCH action.”

Jarrett said “payback has always been part of the sport,” and that the Keselowski incident “probably looked worse than it really was” because his car went airborne. Otherwise it would have gone down as a routine fender-bender.

“Unless you’ve ever been in that situation, it’s impossible to understand the emotions that drivers go through,” Jarrett said. “You have to experience it to understand it.”

Jarrett believes such self-policing is OK, “as long as you don’t overdo it. You have to pick your spot. You never want to get anyone hurt, and there are certain spots on the faster tracks where it’s not a good idea to bump somebody. But by and large these things have a way of getting worked out.”  Jarrett is following in the footsteps of his father Ned, a championship racer who enjoyed a successful second career as a broadcaster.

“My dad taught me a lot about racing and he’s taught me a lot about broadcasting,” Jarrett said. “The most important thing he told me is to just be myself. I’m not someone who knows a lot of big words. I just try to explain what’s going on down on the track. I don’t try to come across as something I’m not.”

What do you think about this situation now that the “Cousin Carl”-“Blazingly Bad Brad” incident has had a couple of weeks to cool off?