When will it end?

Only twice before in NASCAR’s Modern Era (1972-Present) has a streak of different winners to start a season reached as many as eight—in 2000 and 2003. In the latter year, the string reached nine before Kurt Busch ended it with his second victory of the season at Auto Club Speedway (Fontana, Calif.).

The 2000 season produced a record 10 different winners before Dale Earnhardt Jr. broke the streak by winning for the second time that year at Richmond.

On the surface, the numbers would seem to favor an eighth different winner in the 145th Cup event at the .526 mile track, whose races in NASCAR’s top division date to 1949, when Red Byron triumphed in the inaugural event there.

After all, seven of the 10 active short-track winners in the Cup series have yet to take a checkered flag this season, a group that includes Kyle Busch, Denny Hamlin, Kurt Busch, Brad Keselowski, Kevin Harvick, Ryan Newman and Chase Elliott.

The first five drivers on that list also are the top five active drivers in career short-track wins, led by Kyle Busch with 16. Denny Hamlin, a seven-time winner last year, has five victories at Martinsville, but he hasn’t claimed a grandfather clock trophy since 2015.

Elliott, the reigning series champion, has only one short-track win on his resume, but he’s the most recent victor at Martinsville, where he won last fall to advance to the Championship 4 race at Phoenix.

Keselowski won the spring races at Martinsville in 2017 and 2019, and he’s optimistic as the schedule turns to back-to-back races at two of his favorite tracks—Martinsville and Richmond.

“I’m pumped,” Keselowski said. “When we got out of Bristol, I left with a smile on my face, knowing that we had Martinsville, we had Richmond—those are two of my best race tracks. At Martinsville, we’ve been just so solid the last few times, and then Richmond was kind of a dominant race for us last fall.”

When it comes to snapping the streak of different winners, the most likely candidate is Martin Truex Jr., who triumphed in the fifth race of the season at Phoenix. In the fall of 2019, Truex got a breakthrough victory at Martinsville and backed that up with a win in last year’s June race.

“Martinsville has become one of our better tracks,” Truex said. “I just feel like, working with the same group for so long, we’ve hit on something the past few years and been able to keep fine-tuning that and put ourselves in position to run up front.

“We have a lot of confidence going into this weekend that we can put ourselves in contention again, if we can avoid mistakes and stay out of trouble.” 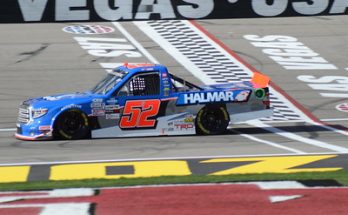