Natalie Decker will pilot the No. 44 Chevrolet Silverado for Niece Motorsports in the NASCAR Gander RV & Outdoors Truck Series (NGROTS) on a part-time basis during the 2020 season.

Decker will make her debut with Niece Motorsports in the first race of the 2020 season, at Daytona International Speedway.

“Change is inevitable, change is expected and exciting, and change is also frightening,” said Decker. “But this year is a year I’m ready for! I have never felt so prepared with my health, in the gym, and mentally. There are so many things to be excited about working with Niece Motorsports, starting with my teammates Ross and Ty. I’m ready to learn from them and be 100% open minded going into the season!”

Decker made 19 starts in the NGROTS last year for DGR Crosley. Decker joins Ty Majeski, Ross Chastain and Carson Hocevar, who will all race for Niece Motorsports in 2020.

“We are excited to have Natalie join the team,” said team owner Al Niece. “Natalie has shown a lot of talent, and we are excited to see her continue to develop that at Niece Motorsports. We are certain we will put her in competitive equipment that will really give her a chance to shine.”

Decker got her start racing go-karts in her native Wisconsin, where she won four track championships. From there, she made the move into full-sized stock cars. She was the CWSSA Super Stock champion out of a talented field of 35 drivers. Success continued in the Limited Late Model division, where she won one race and had two podium finishes.

Next, Decker moved into the competitive Late Model ranks, completing every lap of the World Series of Stock Car Racing at Florida’s New Smyrna Speedway in 2013. Her on-track success led her to being selected to the 2013 and 2014 NASCAR Rev Racing Drive for Diversity combine.

At State Park Speedway in Wisconsin, Decker had 10 fast times and seven feature races in 2014, leading her to the track championship. She was also the Rookie of the Year and finished fourth in overall points in the State Park Super Late Model division.

In 2015, Decker was selected by NASCAR to be a part of the NASCAR Drive for Diversity program, with proven race-winning team Rev Racing. She battled week-in-and-week-out against the top short track racers in the country at “The Birthplace of the NASCAR Stars,” Hickory Motor Speedway.

Decker turned heads at Hickory and beyond with the Rev Racing team and also saw plenty of success with her family-operated Super Late Model at tracks from Wisconsin to Florida, with wins at Golden Sands and State Park Speedways.

Decker became the first female racer to score a podium finish in the ARCA Midwest Tour. Her success in the state of Florida through the season also earned Decker the prestigious title of NASCAR Whelen All-American Series Rookie of the Year in the Sunshine State. 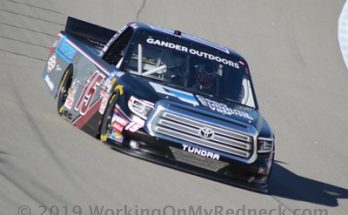